There have been all kinds of reports of delays in aid to Balochistan for relief for earthquake victims. The latest word is that within the past 24 hours Nine extremely tortured bodies of Baloch missing persons were found, four in Dera Bugti and five in Panjgur. It seems that the Pakistani Army is worried that relief workers will come across too many tortured and murdered bodies by the side of the road. Stories vary. Some document Pakistani soldiers spreading mines after the quake, holding up truck convoys and heading in in full combat gear. Whatever the truth is, it seems certain that the Pakistani Army is intent on covering up a lot of damning evidence of extensive abuse and harsh treatment of Balochis. We have been monitoring this situation for some time.
From Social Media:

END_OF_DOCUMENT_TOKEN_TO_BE_REPLACED 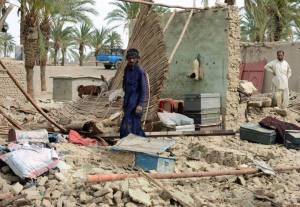 It was around 4.30pm on Tuesday when the first shock sent the terrified residents of Balochistan out of their homes and workplaces. That was more or less routine for people living in Balochistan. But, when the jolt shook the ground thunderously the second time they knew it meant disaster.
END_OF_DOCUMENT_TOKEN_TO_BE_REPLACED 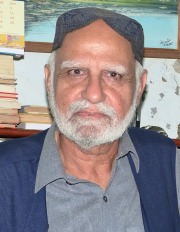 Awaran, a place that already was suffering from shocks of long-drawn army and Frontier Corps operations in their effort to contain the brave and unflinching resistance that Dr Allah Nazar and the people there are putting up against their attempts to make people meekly submit to exploitation, was hit by a 7.8 magnitude earthquake on September 24. The UN humanitarian envoy, Dr Abdullah Al-Matouq, said the UN was ready to help with relief work in Balochistan’s earthquake-affected areas but the Pakistani authorities have refused. This isn’t the first time that the disaster-stricken Baloch have been left at the mercy of the vagaries of nature and elements on a flimsy security concerns excuse for which the establishment itself is to blame. When Balochistan was battered by Cyclone Yemyin in June 2007 causing flooding affecting 1.5 million people, the international relief organisations were suddenly stopped on the security concerns excuse. Even the relief operations of the Baloch Students Organisation (BSO) and other nationalist organisations were stopped and camps disbanded. The same is true today; early Thursday morning some Baloch students of Dera Ghazi Khan (DGK) put up a camp at the Traffic Chowk near the DGK Press Club to collect supplies for the Awaran quake victims but were soon rudely stopped by intelligence agencies personnel. Independent news reports confirm that the relief supplies being sent by individuals and NGOs are stopped by the FC, which says only it will distribute them. The National Disaster Management Agency (NDMA) and Provincial Disaster Management Agency handouts claiming relief are bogus as reports prove no supplies had reached either Gajjar or Malaar till Friday.

END_OF_DOCUMENT_TOKEN_TO_BE_REPLACED

Dr. Nazar said that the workers of private NGOs or international bodies, us as the UN, would be welcomed by the Baloch Freedom Fighters

KARACHI: An impasse looms large over the relief effort in Balochistan’s earthquake-devastated region – an area known to be a hotbed of Baloch Freedom Fighters – which has already resulted in mushrooming clashes in the region. However, a top commander has offered a way forward through the mistrust between rebels and security forces: Let the relief effort be handled by private or international organisations.

'Dr. Allah Nazar today is the singularly most effective and legendary resistance leader on the ground, leading BLF'

END_OF_DOCUMENT_TOKEN_TO_BE_REPLACED

Balochistan Earthquake: Pakistan should back calls for International help

In the aftermath of the Tuesday’s devastating earthquake in Balochistan, head of the Pakistan Disaster Management Authority (PDMA) said they are capable of coping with the situation in Balochistan. People in Balochistan have viewed this statement as a part of a continued policy of discrimination and injustices toward the least developed province. Interestingly, at the same time the chief minister of the province, Dr. Abdul Malik Baloch, was appealing to international donors to come forward and help in rescue and relief operations. The chief minister is aware of the fact that neither the provincial nor the federal governments have the capability to deal with the situation.
END_OF_DOCUMENT_TOKEN_TO_BE_REPLACED 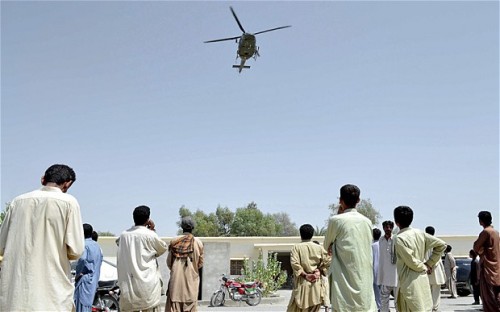 In a statement issued by Baloch Students Organization (Azad), the central spokesman has said that Pakistani helicopters with the help of ground troops, carried out a massive military offense in Gajjar area of Mashkay. At least five army helicopters continuously shelled the quake affected houses. This has worsen the situation in the affected areas, the spokesman said.

END_OF_DOCUMENT_TOKEN_TO_BE_REPLACED

“We have not received anything from the government. We have not got any relief, there is no supply of foods or medicine,” said furious villager Abdul Latif. 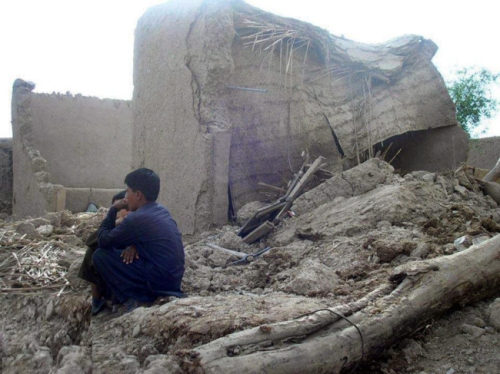 Tens of thousands of survivors of Balochistan’s earthquake waited for help in soaring temperatures Thursday, as the death toll rose to nearly 350 and anger grew at the slow pace of aid.

More than 100,000 people made homeless by Tuesday’s 7.7-magnitude quake spent a sixth night in the open or under makeshift shelters as response teams struggled to reach the remote region in Balochistan province.

No relief operation, all we see is military operation: #BalochisanEarthQuake affectees