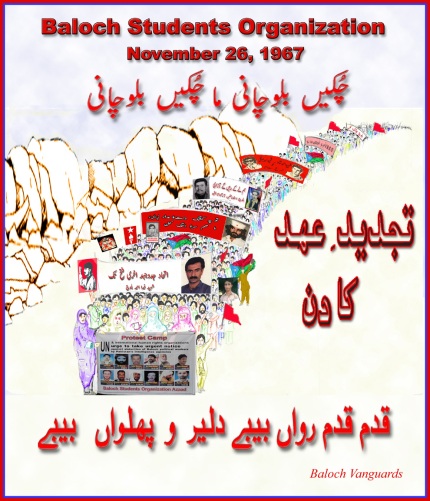 Toronto, Nov 19, 2017 – Baloch National Movement and BSO-Azad jointly protested today in Toronto to express their anger over the recent enforced disappearances by the Pakistani security forces in which more than a dozen students and children were abducted from their home in Karachi, Sindh. World Sindhi Congress expressed their solidarity and took part in the protest.

Baloch Students Organization – Azad General Secretary, Sanaullah Baloch and three other Central Committee members were picked up on Nov 15, 2017 from their home in Karachi during a raid by the ISI and Sindh Rangers. These illegal abductions by the Pakistani security forces have resulted in the torture and death of hundreds of political activists in Balochistan.

END_OF_DOCUMENT_TOKEN_TO_BE_REPLACED

As trees have seeds and mushrooms spores to grow from, similarly movements whether political or armed have historical seeds; movements do not happen without a reason. The Irish Republic is said to be the result of British callousness during the Irish Famine of 1845-1852; Bangladesh the result of Mohammad Ali Jinnah’s March 21, 1948 Dhaka speech about Urdu and then the continued injustices.

Balochistan issue arose when Khan of Kalat was forced to sign the instrument of accession on March 27, 1948. The soil for these seeds are people who are historically conscious of their political and social rights.

The Baloch struggle for their rights has simmered since, and has now and then boiled over into open armed insurgencies. These didn’t succeed in their aims but at the same time Pakistan, despite the use of military might was unable to crush the Baloch resistance.

END_OF_DOCUMENT_TOKEN_TO_BE_REPLACED

LONDON — Exiled leaders of the Baloch national movement, Nawab Brahumdagh Bugti head of BRP and Nawab Mehran Marri have decided to join hands in an effort to highlight the genocide being inflicted on the Baloch people in Pakistan-occupied Balochistan.

In a joint statement issued on Sunday, the two leaders said the Pakistani state and security forces continue their atrocious in Balochistan and that the Baloch Genocide was being intensified with every passing day.
“Gross human rights abuses, war crimes, enforced disappearances, torture, mutilated dead bodies left on roadsides, and the targeting of civilians including women and children have become a routine practice by Pakistani security forces in Balochistan,” said Brahmdagh and Mehran Marri in their statement

END_OF_DOCUMENT_TOKEN_TO_BE_REPLACED

Perils of reporting in Balochistan discussed

KARACHI: The Human Rights Commission of Pakistan held a consultants’ meeting at their office here on Saturday to look into the growing restrictions on the media, specifically with reference to Balochistan.

Explaining the issue, Prof Dr Tauseef Ahmed Khan said that there had been plenty of changes in the political scene during the past year, but for common people the space was getting restricted.

END_OF_DOCUMENT_TOKEN_TO_BE_REPLACED 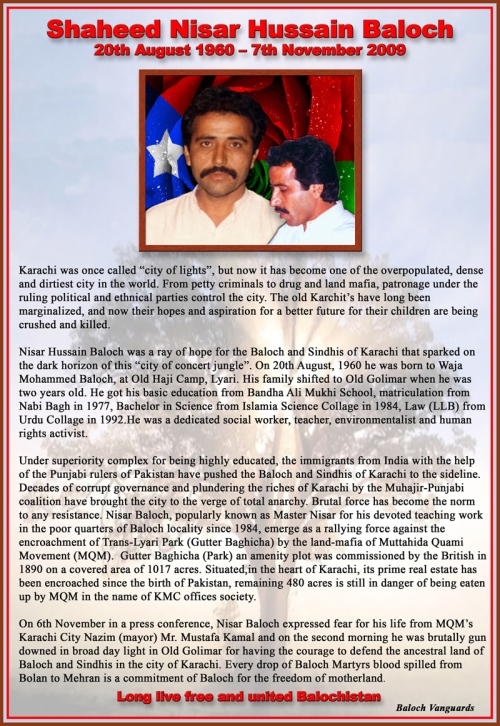