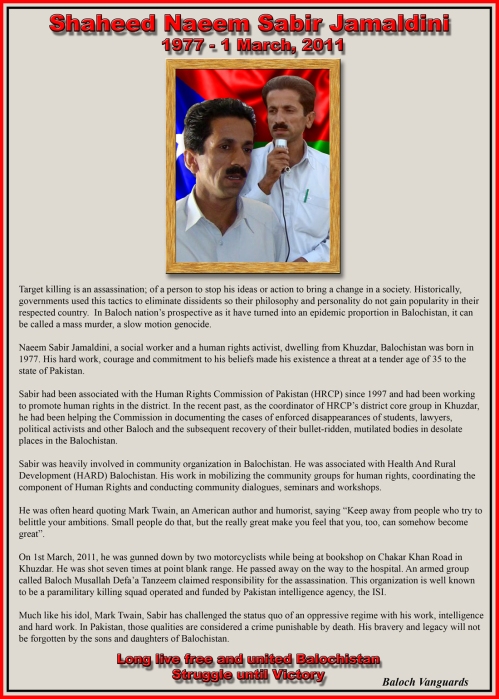 “Death is unavoidable; if we overcome the fear of it, then nobody in this world can keep our motherland a slave in rotten shackles.” Shaheed Abdul Waheed Baloch

In February 2005, Pakistan deployed armed forces numbering in hundreds of thousands in Dera Bugti, the seat of the tribal Bugti area of Balochistan and started an offensive military operation. On March 17, 2005, the Pakistani forces heavily shelled town and villages that resulted in killing of sixty-one civilians, mostly belonging to the Hindu community. Dera Bugti became a killing field of Pakistani military that continues to date. Soon the fire engulfed all Balochistan, especially in the aftermath of slaying of the tribal head, Nawab Akbar Khan Bugti in August 2006.

END_OF_DOCUMENT_TOKEN_TO_BE_REPLACED

Interview with Baloch commander: “China in Balochistan will destablise India”

His group fights against Pakistani Jihadis in Balochistan. In the year 2004 the Balochistan Liberation Front or the BLF led by Dr Allah Nazar Baloch claimed responsibility for attacks on Chinese engineers in Gwadar.

Dr Allah Nazar Baloch a gold medalist doctor turned guerilla leader leads one of the most powerful Baloch resistance groups in Balochistan called the Balochistan Liberation Front or the BLF.

The Baloch nationalism is a movement that claims that the Baloch people are an ethno-linguistic group mainly found in Pakistan , Iran and Afghanistan are a distinct nation.

END_OF_DOCUMENT_TOKEN_TO_BE_REPLACED

BALOCHISTAN: A militant group in Pakistan’s restive Baluchistan province has threatened a press club with “action” unless it expels its Christian journalists, club authorities said.

“You call yourself faithful Muslims, while under your watch Christian journalists are working against Islam,” the letter, written in the Urdu language, stated.

END_OF_DOCUMENT_TOKEN_TO_BE_REPLACED

Occupying forces can never win heart and minds of a colonized nation. Their weapons of choice are fear, annihilation and demographic change for subduing it and eliminating the seeds of resistance.

By calling themselves “Sarmachar” Baloch freedom fighters have eliminated the psychology of fear. Sarmachar literally means “a person who does not care about his head” in other words fearless of death.