Dr. Allah Nazar Baloch delivers a speech to Baloch freedom fighters on February 9, 2012 with reference to the U.S. House of Representatives, Committee on Foreign Affairs, Oversight and Investigations Sub-Committee Hearing on Balochistan held on February 8, 2012.

END_OF_DOCUMENT_TOKEN_TO_BE_REPLACED

KARACHI: Vice Chairman of Voice for Baloch Missing Persons Qadeer Baloch on Monday said that credible institutes should investigate into the issue of missing persons in Balochistan as an independent inquiry cannot be expected from the state.

He was speaking to the media at Karachi Press Club on Monday. He said that the international community should take notice of the situation in Balochistan, adding that international human rights organizations should come to Balochistan and probe the matter.

Qadeer Baloch said that the brutal killing of people in Balochistan was on the rampage by the state institutions, fearing that if the international community does not intervene, the killings and abductions would continue.

END_OF_DOCUMENT_TOKEN_TO_BE_REPLACED

QUETTA, Feb., 25:- The Baloch National Voice, a separatist group, has claimed that the residence of slain Baloch nationalist leader Nawabzada Balach Marri in Quetta has been raised to ground by pro-government elements who were backed by personnel of the security forces.

In statement issued here on Saturday late night, the BNV strongly condemned the dismantling of the house of Balach Marri and said that for the last two months the house had been occupied by armed persons having the support of the Chief Minister Balochistan and intelligence agencies.

END_OF_DOCUMENT_TOKEN_TO_BE_REPLACED

“We have information about the release of 10 missing persons, but the officials concerned have not shared the report in this regard,” an official of the Balochistan government told Dawn.

Nasrullah Baloch, a spokesman for The Voice for Baloch Missing Persons, told reporters that intelligence officials had taken away the four persons, all of whom hailed from Makran division. One of them had been missing for the past one year while the three others disappeared last month.

END_OF_DOCUMENT_TOKEN_TO_BE_REPLACED 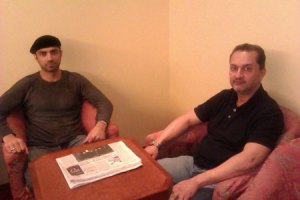 “Should a robber break into my house, and, with a dagger at my throat, make me seal deeds to convey my estate to him, would this give him any title? Just such a title by his sword has an unjust conqueror who forces me into submission. The injury and the crime is equal, whether committed by the wearer of a crown or some petty villain” — John Locke.

END_OF_DOCUMENT_TOKEN_TO_BE_REPLACED

Dr. Allah Nazar Baloch on the US Congressional Hearing

Dr. Allah Nazar Baloch gives his take from ground zero (Balochistan) on the congressional hearing on Baluchistan by the U.S. House of Representatives, Committee on Foreign Affairs, Oversight and Investigations Sub-committee, chaired by Rep. Dana Rohrabacher.