Dr. Zaffar Baloch, the President of Baloch Human Rights Council – Canada unmasked the historical myths and lies of Pakistani establishment about Balochistan in an interview given to a Canadian Channel.

International Voice for Baloch Missing Persons (IVBMP) was set up to campaign against abductions, enforced-disappearances and extra judicial killing of Baloch political activists by the occupying states of Pakistan and Iran. One individual that co-operated with us in this campaign, at early days, was Mr Ahmar Mustikhan. From the very inception of IVBMP we were cautioned about the character and true intention of this individual by many Baloch who knew him more closely. Nevertheless, his collaboration with us was for a short period of time and relatively insignificant.

END_OF_DOCUMENT_TOKEN_TO_BE_REPLACED 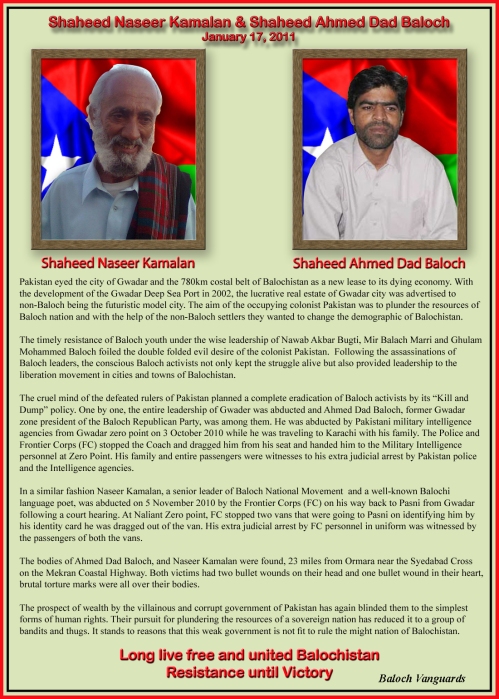 PAKISTAN: Army creates an organization to kill intellectuals and activists in Balochistan, in the name of peace

An organization claiming to work for the restoration of peace in Balochistan province has confessed to the killings of many activists, and has announced its intention to kill 35 more activists on its hit list in recent weeks. The organization has three activists in its custody and announces that at any time their bodies will be gifted to the nationalist movement of Balochistan. There has been no action from the authorities against the organization however.

It is alleged that the organization, Tehreek-e-Nefaz-e-Aman Balochistan (TNAB; movement for the restoration of peace in Balochistan), has been formed by secret agencies, particularly by the ISI, to crush the nationalist movement, which is against military intervention in the province and does not allow the people of Balochistan to control their rich natural resources.
END_OF_DOCUMENT_TOKEN_TO_BE_REPLACED 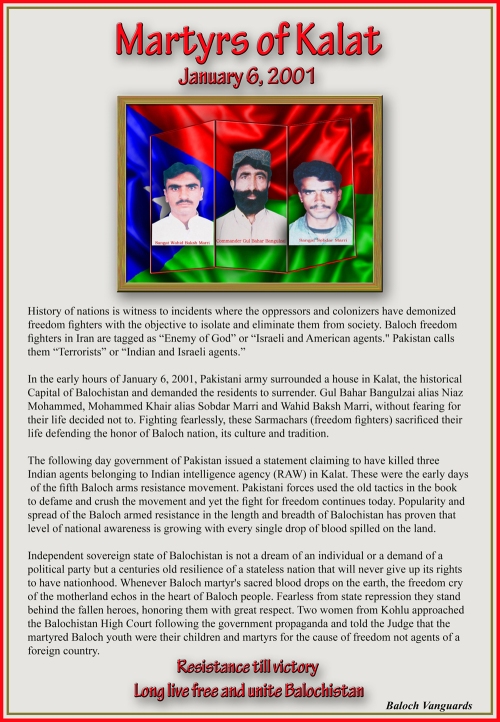 According to the details body of Babu Saleem Badini, a resident of Machh town, was found in Dhori area of Dasht, Balochistan on the first day of year 2012. The victim was abducted around a month ago from Quetta.

Eye-witnesses reported that victim’s body bore sign of brutal torture and he was shot in the head.The wounds suggested that he had been subjected to severe torture before shooting him dead.
END_OF_DOCUMENT_TOKEN_TO_BE_REPLACED