END_OF_DOCUMENT_TOKEN_TO_BE_REPLACED

Senior Superintendent of Police (SSP) Rao Anwar said a pamphlet written in Sindhi and bearing the name of a group called ‘Sindhudesh Revolutionary Party’ was recovered from the site of the blast. The pamphlet denounced “foreign control over Sindh’s natural resources”.

END_OF_DOCUMENT_TOKEN_TO_BE_REPLACED

A brief report on human rights violations in Balochistan by VBMP

The Voice for Baloch Missing Persons (VBMP) has observed misdeeds by the state of Pakistan in form of enforced disappearances, displacement of population and extra judicial killings in Balochistan, which are documented in detail and salient features are inscribed hereby for conveying information to international bodies with anticipation of provision of justice for wrenched masses in Balochistan.

Thousands of Baloch people have been abducted and many of them have been killed extra judicially in custody of Pakistani state security forces whose mutilated dead bodies have been found dumped in different areas across Balochistan. Rather, the abolition of despicable acts the state apparatuses constituted inhumane laws in the pretense of state sovereignty, such as the Pakistan Protection Ordinance (PPO).

END_OF_DOCUMENT_TOKEN_TO_BE_REPLACED

Nawab Yousif Ali Khan Aziz Magsi was born in 1901 in Jal Magsi, Balochistan. His father Nawab Qassir Khan Magsi was the chief of Magsi tribe. He learned his Basic and religious education from Qasi Rasool Buskh. Mulana Gulam Qader of Baulpur taught him Urdu, Persian and Arabic. He became a pupil of Kaniah Lal of Lahore to learn English. Under the guidance of such great teacher of there time Yousif Magsi personality was build, which made him the visionary, revolutionary, freedom loving leader of the Baloch nation.
END_OF_DOCUMENT_TOKEN_TO_BE_REPLACED 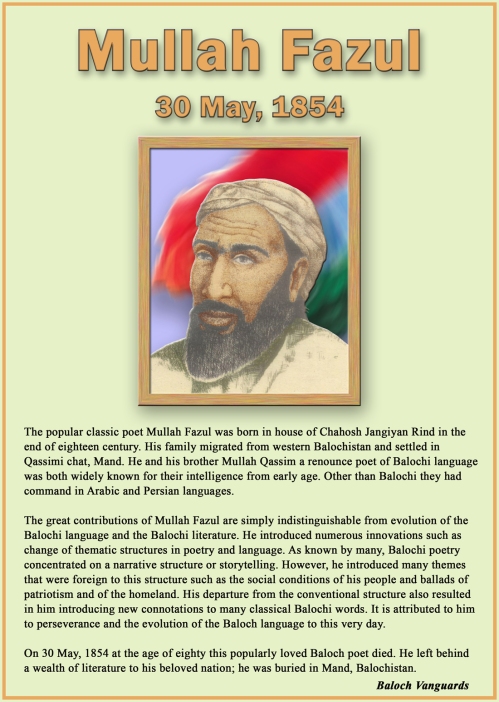