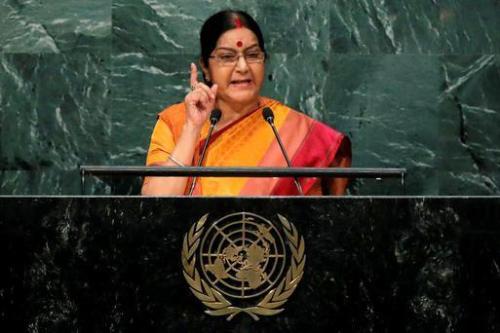 PTI | United Nations | Sept 26, 2016: In a sharp rebuke to Prime Minister Nawaz Sharif’s “tirade” on Kashmir, India today said those accusing others of rights violations must introspect as it censured Pakistan for the first time at the UNGA for perpetrating the “worst form of state oppression” in Balochistan.

Taking a veiled dig at Pakistan, External Affairs Minister Sushma Swaraj in her address at the 71st UN General Assembly (UNGA) session said there are nations “in our midst” where UN designated terrorists roam freely and deliver “their poisonous sermons of hate with impunity”, an apparent reference to Mumbai attack mastermind and Jamaat-ud-Dawa chief Hafiz Saeed.She also made a strong pitch for isolating such nations who speak the language of terrorism and for whom sheltering terrorists has become “their calling card“.

“In our midst, there are nations that still speak the language of terrorism, that nurture it, peddle it, and export it. To shelter terrorists has become their calling card. We must identify these nations and hold them to account,” Swaraj asserted in her nearly 20-minute speech in Hindi.

“These nations, in which UN designated terrorists roam freely, lead processions and deliver their poisonous sermons of hate with impunity, are as culpable as the very terrorists they harbour. Such countries should have no place in the comity of nations,” Swaraj said, in essence making a call to the international community to isolate such nations.

In a strong rebuttal of the “baseless allegations” made by Sharif from the podium of the General Assembly about human rights violations by India in Kashmir, Swaraj said, “I can only say that those accusing others of human rights violations would do well to introspect and see what egregious abuses they are perpetrating in their own country, including in Balochistan. The brutality against the Baloch people represents the worst form of state oppression.”

Countering Pakistan’s claims that India has imposed pre-conditions on talks, Swaraj said India got the terror attacks of Pathankot and Uri “in return” for taking the initiative to resolve issues with Islamabad not on the basis of conditions but on friendship.

She told Pakistan to “abandon this dream” of obtaining Kashmir, asserting that Jammu and Kashmir is an “integral part of India and will always remain so“.

“It (Pakistan) persists in the belief that such attacks will enable it to obtain the territory it covets,” Swaraj said, adding that their plans will not succeed.

Swaraj forcefully rejected Sharif’s remarks in his General Assembly address last week that India has placed “pre-conditions” for talks which are not acceptable to him.

“Did we impose any pre-condition when I went to Islamabad for the Heart of Asia conference and agreed to begin the Comprehensive Bilateral Dialogue? Did we impose any pre- condition when Prime Minister Modi travelled from Kabul to Lahore? What pre-conditions?,” Swaraj said, making a reference to the surprise visit Modi made to Lahore last December on his way back from Kabul.

In her address, Swaraj said India has attempted an unprecedented “paradigm of friendship” with Pakistan over the last years, which has included wishing the Pakistani leader on the festival of Eid, wishing success to the his cricket team and extending good wishes for his health. In return, she said for these gestures, India got the terror attacks in Uri and Pathankot.

“We conveyed Eid greetings to the Prime Minister of Pakistan, wished success to his cricket team, extended good wishes for his health and wellbeing. Did all this come with pre-conditions attached,” Swaraj said.

“And what did we get in return? Pathankot, Bahadur Ali, and Uri. Bahadur Ali is a terrorist in our custody, whose confession is a living proof of Pakistan’s complicity in cross-border terror,” she added.