What is Pakistan’s militancy issue all about?

Who’s fighting whom in Pakistan? Why does the country’s powerful army continue to support some militant groups? DW examines the protracted conflict in the nuclear-armed nation and its possible effects on the region.

Over 60 Pakistani liberal intellectuals from all over the world gathered in London on Saturday, October 29, to discuss the future of their country. Organized by South Asians Against Terrorism and for Human Rights forum, the conference issued a “London Declaration for Pakistani Pluralism” that highlighted a number of issues facing the country, but most prominently Islamic extremism and the role of Pakistani army in politics.

END_OF_DOCUMENT_TOKEN_TO_BE_REPLACED

PTI | United Nations | Sept 26, 2016: In a sharp rebuke to Prime Minister Nawaz Sharif’s “tirade” on Kashmir, India today said those accusing others of rights violations must introspect as it censured Pakistan for the first time at the UNGA for perpetrating the “worst form of state oppression” in Balochistan.

Taking a veiled dig at Pakistan, External Affairs Minister Sushma Swaraj in her address at the 71st UN General Assembly (UNGA) session said there are nations “in our midst” where UN designated terrorists roam freely and deliver “their poisonous sermons of hate with impunity”, an apparent reference to Mumbai attack mastermind and Jamaat-ud-Dawa chief Hafiz Saeed.She also made a strong pitch for isolating such nations who speak the language of terrorism and for whom sheltering terrorists has become “their calling card“.

END_OF_DOCUMENT_TOKEN_TO_BE_REPLACED

Don’t touch me. Don’t touch me,” warned Ahmar Masti Khan, Washington’s Baloch activist journalist, “don’t touch me. I am American.” He had just flabbergasted Pakistan’s visiting Prime Minister, Nawaz Sharif, by heckling him at the United States Institute for Peace (USIP) on October 22nd. Two strong African-American security guards immediately overpowered the man who was shouting, “Stop war crimes in Balochistan” and then they whisked him away.

END_OF_DOCUMENT_TOKEN_TO_BE_REPLACED

BALOCHISTAN: Pakistan army has killed and dumped teenager Izzat Baloch, son of Tangi Baloch. Izzat was abducted on November 8th, 2013 from Maheer area of Mand, when the occupying Pakistani army raided the house of Tangi Baloch and abducted five from the family, later four of whom were released. The central spokesperson of the Baloch Student Organization – Azad said in press release.

The Spokesperson also condemned the attack on Ahmed Jan house in Dawnk, Turbat. The spokesperson also declared that Waleed Baloch, son of Ahmed Jan is not associated the BSO-Azad in anyway.
END_OF_DOCUMENT_TOKEN_TO_BE_REPLACED 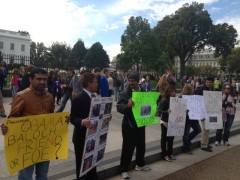 WASHINGTON, DC: Members of the Baloch community protested outside the White House on Wednesday morning as Pakistan’s Prime Minister Nawaz Sharif met with U.S. President Barrack Obama as a part of his three-day long trip to Washington, D.C.

The protesters, who came from different U.S. cities, condemned Islamabad’s fresh military operations against Baloch political activists, including the kill and dump activities and forced disappearances attributed to Pakistani intelligence agencies. Native Balochs from Irani and Pakistani Balochistan attended the protest while several American citizens also participated in the march outside the U.S. president’s residence.
END_OF_DOCUMENT_TOKEN_TO_BE_REPLACED

I was amused to see Saddruddin Hashwani, head of Hashoo Group, assume the role of a statesman advising all to become more responsible and mature. I would have been surprised had not his uttering come to notice before. In this recent wide-ranging preposterous statement he advised political parties to cooperate for formulation of strategy to resolve national issues. He opined that the proper usage of natural resources would stabilise the country’s economy and added, “Almighty Allah has gifted Pakistan with rich natural resources and our next 11 generations could benefit from the Reko Diq project as this project will save Pakistan’s future.” He, in my opinion, suggested rather ludicrously that the Reko Diq project should be run under the supervision of the country’s strategic institutions (read army) so that it could be protected from fraudulent practices. Angels incarnate they? He praised Nawaz Sharif’s initiatives on the Gwadar Port and Shahbaz Sharif’s hard work for stabilising the economy. He said Pakistan’s business community always sacrificed for the country and was ready to render more. Some sacrifices!
END_OF_DOCUMENT_TOKEN_TO_BE_REPLACED

The liberal circles in general, and pseudo-nationalists of Balochistan in particular, are ecstatic, too precipitously I’d say, over Nawaz Sharif’s decision to put Dr Abdul Malik in the saddle in Balochistan. The accolades and felicitations would have one believe that Mr Sharif’s ‘gift’ is a panacea for and a salve to all the injustices and atrocities perpetrated against the Baloch people and Balochistan for the last 65 years. Incidentally, this best choice of the establishment just is not good enough to help it stem the rising tide of demands for freedom.

END_OF_DOCUMENT_TOKEN_TO_BE_REPLACED

Pakistan has a new Sharif in town

On the eve of the May 11 Pakistan elections, while foreign correspondents wasted reams of newsprint making predictions scripted straight out of the Pakistan military playbook, two men suggested something fishy was about to unfold.

First, the New York Times’ correspondent Declan Walsh, who in 2011 had written a stinging expose on Pakistan’s “secret war in Balochistan,” was expelled from the country. The letter asking him to leave said he had indulged in “undesirable activities.”

END_OF_DOCUMENT_TOKEN_TO_BE_REPLACED

Mian Mohammad Nawaz Sharif, the head of Pakistan Muslim League (PML-N), did not return home empty-handed from his two-day long visit to the volatile Balochistan province. The twice-elected prime minister notched ample scores to become confident to achieve the ‘required run rate’ before the next general elections or, say, the mid-term polls. The biggest achievement of Sharif was the decision of two highly influential Baloch to join his party.