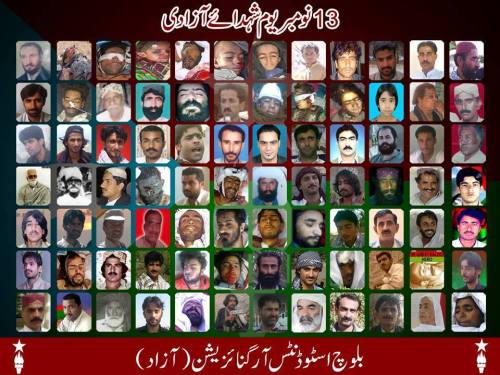 BALOCHISTAN: On central call of BSO-Azad, homage was paid to the Baloch martyrs on November 13th, the Baloch Martyrs day, commemorated to pay rich tribute to martyrs of the Balochistan freedom movement. The day marks the fierce battle fought against the British in the besieged city of Kalat, by Mir Mehrab Khan Baloch in 1839 in which the Khan and all his companions were killed.

The memorial services were begun with two minutes of silence in remembrance of the martyrs. Leaders of the freedom movement accoladed the martyrs and reaffirmed their committment to the cause of, both famous and unknown, fallen heroes. They said that the Baloch Motherland had always faced the threat of occupation which she defeated with the relentlessness and selflessness of her brave children, who with their sacrifices and dedication to the Baloch Nang (Code of Honor), have handed to us a golden culture for generations to follow.

The leaders said that it was because of the Baloch martyrs dauntlessness that today we are the owners of a fierce and unwavering legacy that has immortalized the Baloch movement. The leaders, holding responsible Baloch parliamentarian politicians and mercenaries, in their speeches said that today, if our sufferings are increasing it is because of people who for personal gains are selling the sacrifices of Baloch nation to the occupiers in Islamabad. The leaders criticized, by name, dr. Malik Baloch the serving Chief Minister of Occupied Balochistan, Akhter Mengal the chief of the Balochistan National Party, Hasil Bizanjo the head of the National Party for their dubious roles and the traitorous Baloch mercenaries, calling both national criminals.

The leaders referring to the sacrifices of the martyrs said that they gave away their lives for our futures, and that the Baloch must carry on the struggle till they win their freedom and that the guardians of the martyrs are devoted people like Mama Qadeer Baloch, the peasants, the burgeoise and the stalwarts but not traditional power-brokers like tribal chiefs and notables. Following the memorial services rallies were lead to the graves of slain heroes.