Toronto, July 31, 2016 – Baloch National Movement (BNM) called for a protest in Toronto today against the enforced disappearance of Wahid Baloch by the Pakistani security agencies on July 26, 2016 when he was returning to Karachi. His vehicle was stopped at the Toll Plaza entry point and he was whisked away at gunpoint by masked ISI personnel. Mr. Baloch is missing since then.

The local police station has refused to file a report on his illegal abduction without giving any reason as to why the legal process was being obstructed.

Significant number of Baloch Canadians took part in the protest called by BNM-North America and vented their anger at the Pakistani government and its security apparatus for the acts of crimes against humanity in Balochistan.

BNM convener for North America, Zaffar Baloch, and BSO-Azad Chairperson, Karima Baloch addressed the gathering and strongly condemned the Islamabad policies towards Baloch and Balochistan. They emphasized that 23,000 Baloch students, youth, writers, poets, lawyers, journalists and political activists have been illegally abducted by the Pakistani army and disappeared since 2003. Mr. Baloch is a book publisher, human rights defender, and editor of a Balochi language monthly (Labzank) and a social worker who has sacrificed his entire adult life for the welfare of the downtrodden. 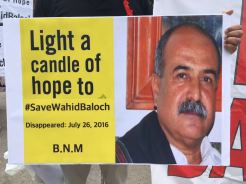 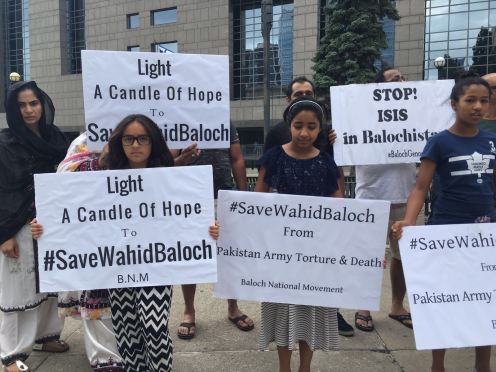