BRP protests against Baloch Genocide & CPEC at UN in Geneva

Protesters held photos of Baloch martyrs, victims of “kill & dump”, and banners subscribed with various slogans against Pakistani state atrocities, Chinese intervention and the Baloch genocide. The statement says the objective of the protest was to highlight war crimes by Pakistani armed forces, human rights violations and the chinese intervention into the Baloch soil.

While Mr. Sher Baz Bugti said that a five days awareness camp will be established outside UN Office in Geneva to spread awareness about Baloch genocide, human rights violations and state atrocities against the Baloch people on 25th June, 2016.

It is further said in the statement that the five days awareness camp will expose the ugly face of Pakistani state and how Pakistan was using CPEC to cover up the illegal occupation on Balochistan that it has been imposing for years besides the atrocities against the Baloch people. Pakistani atrocities against Baloch people are an example of terrorism that can not be found in the rest of the world.

Mr. Bugti said that Pakistan had been continuously violating human rights in Balochistan by indiscriminately bombarding the Baloch civil populace, abducting innocent Baloch civilians and burying them into mass graves after torturing them to death under custody.

“The so-called China Pakistan Economic Corridor (CPEC) is a design to enslave the Baloch people: The inhabitants are being forced to flee their ancestral lands in order to pave way for the corridor” he said.

He urged the human rights organization to play a practical role in putting an end to the Baloch genocide. 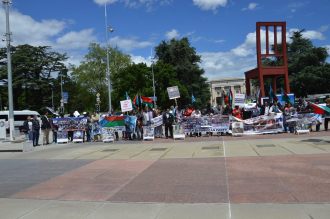