‘Am I Baloch because of my Paag?
“Resistance Day or Cultural Day”

I am posing a question and will then try to answer it; in my answer I will express my views on something which has quite recently become a fad and fashion with zero returns either politically, culturally, socially or economically.

END_OF_DOCUMENT_TOKEN_TO_BE_REPLACED

Toronto, July 4, 2011 – Baloch Human Rights Council (Canada) and the International Voice for Baloch Missing Persons (IVBMP) will be holding a joint event in Toronto to honour the martyrdom of Prof. Saba Dashtyari, target killed by the Pakistani military death squad. He was assassinated on June 1, 2011 while walking back home in Quetta, Balochistan.

Prof. Dashtyari was a revolutionary scholar, a poet, and author of several books on Balochi language, literature, and history. His academic career at the Balochistan University was a beacon of light that inspired students such as Qambar Chakar who fearlessly embraced martyrdom in the custody of the Pakistani intelligence services after extreme degree of torture.

Since July 2010, the Pakistani paramilitary death squads have dumped more than 200 mutilated bodies of disappeared Baloch students, journalists, lawyers, teachers, and political activists in the wilderness. Forensic reports of the discovered bodies are indicative of extreme torture including broken bones, deep cuts, burns, and point-blank shots to the head.

In the backdrop of the liberation struggle in Balochistan and mass scale human rights violations committed by the Pakistan Army against Baloch civilians – Prof. Dashtyari took to the streets, armed only with his books, pen, and a voice that spoke without fear.

Join us to honour the martyrdom of this brave son of Balochistan who knew well that the price of freedom is blood and did not falter for a moment.

In history, there is no death – there is only continuity.

END_OF_DOCUMENT_TOKEN_TO_BE_REPLACED 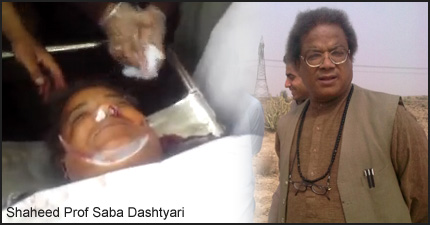 TORONTO – June 01, 2011: Baloch Human Rights Council (Canada) expressed deep sorrow over the targeted killing of Prof. Saba Dashtyari in Quetta today. Prof. Dashtyari was shot dead by unknown assailants, allegedly members of the military intelligence death squad, while he was on his way to Balochistan University where he taught Islamic history and theology.
END_OF_DOCUMENT_TOKEN_TO_BE_REPLACED

Prof. Saba Dashtiyari: Voice of Freedom from the Slums of Lyari

From a poor family of Lyari, Karachi to a jostling crowd around his bullet-riddled body, Prof. Saba Dashtyari has established his place in the emotions of Baloch people. My hands are shaking and eyes full of tears when I heard the news of Prof Saba Dashtayri’s assassination. I cannot claim to have known Prof. Saba Dashtayari well, but I am touched so as thousands of other Baloch political workers in some way or other by this legendary Baloch scholar, teacher, linguist, poet and writer. I recall my first meeting with Prof. Saba Dashtayari in the early 1980s. I missed my university bus so as Prof. Saba , we both hop on the same bus to University of Karachi. The meeting with Prof. on the bus to Karachi University stirred my interest in Balochi poetry and literature and opened my mind on Baloch history and language. This great man changed my complete political outlook. One can always find him in his typical shalwar- kameez, and glasses and sharing emotional hugs to the Baloch political workers in the procession against the slow motion genocide of Baloch masses.
END_OF_DOCUMENT_TOKEN_TO_BE_REPLACED