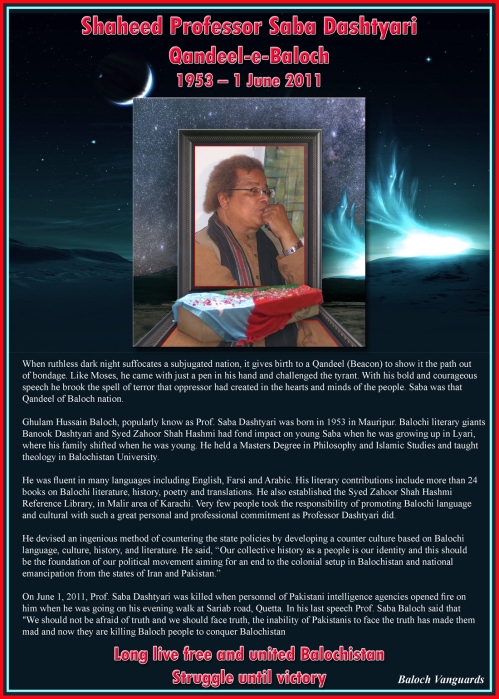 END_OF_DOCUMENT_TOKEN_TO_BE_REPLACED

The 1st June of 2011 brought many things for some it was the day when a partial Solar Eclipse happened, the sun went under a curtain and the moon came over the sun to darken half of the earth and made the life miserable for many as the great giver of life seems inexplicably to disappear from the sky.

Birds prepare for bed; the sky darkens in the middle of the day. It seems as though something dreadful is about to happen. Over the years, experience has shown us that old things come to an end (or are overthrown) under a solar eclipse and a new beginning can be made but this didn’t happened in 2011 not for Baloch nation because it didn’t brought an end to their oppression or their subjugation but it sure brought a partial stop to an era of enlightenment, the era of intellectualism, and it sure brought an end to the life of one of the greatest Baloch leaders known to Baloch nation as “Enlightenment For Baloch” Martyred Professor Saba Dashtyari Baloch.