No clues as to whereabouts of Ehsan Arjemandi – Iran denies extradition: AHRC 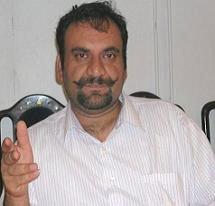 A Statement by the Asian Human Rights Commission

PAKISTAN: No clues as to whereabouts of Ehsan Arjemandi – Iran denies extradition

The Asian Human Rights Commission has received conflicting information about Mr. Ehsan Arjemandi, a Norwegian citizen. The Federal Interior minister previously announced that had been extradited to Iran on September 6, 2009 where he was wanted on several charges, however, it is now believed that he is still being held in custody in Pakistan.

END_OF_DOCUMENT_TOKEN_TO_BE_REPLACED

HRCP and extradition of Baloch prisoners to Iran

Human Rights Commission of Pakistan is an Organisation with the objectives and aims to protect the human rights of citizens of Pakistan. At every Human Rights Council Sessions it claims that it is fulfilling its objects with full responsibility. At least Asma Jhangir chairman of HRCP use to claim it every where that HRCP is doing its best.
END_OF_DOCUMENT_TOKEN_TO_BE_REPLACED