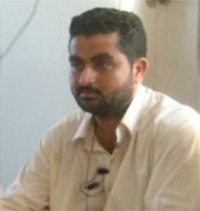 Shaheed Lala Hameed Baloch was born in Haji Hayatan’s home on 8th February of 1985. He got his early education in Govt Modal High school Gwadar. He hailed to a political family. The Shaheed was involved in politics in his school days. He started his political career from BSO (Aman). He was elected as student leader in his college days. He was also elected as member of Public Safety Commission introduced in Musharaf’s era.