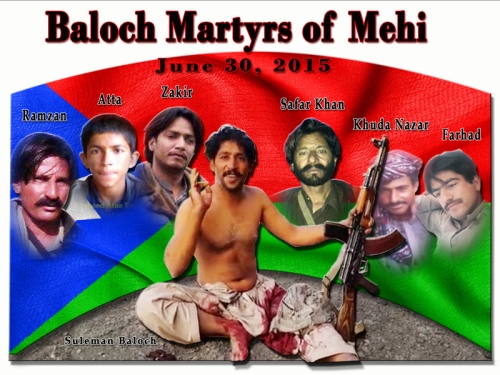 Mehi is a small village in district Awaran, approximately 600 Km from Quetta, the capital of Pakistani occupied Balochistan. It is the birth place of Dr. Allah Nazar Baloch, the commander of Balochistan Liberation Front (BLF) and the bastion of struggle for the independent Balochistan.

Dr. Allah Nazar Baloch and all his male family members are on the list sanctioned by the Military Intelligence and handed to the death squad contract killers with orders to “search & destroy” with immediate effect.

On June 30, 2015, fire rained on Mehi, and the village’s male collective social quarters were the main target of the aerial bombardment and mortar fires.  Pakistan army surrounded Mehi and flattened it with artillery, and rockets fired from the US-made helicopter gunships provided to the military to fight Al-Qaida and Haqqani Network in Northern Waziristan. Obviously, it was expected that Dr. Allah Nazar and several commanders of BLF would be present inside the targeted zone, gathered for the condolence meeting for late Mohammed Hassan – father of Suleman and brother-in-law of Dr. Allah Nazar.

Thirteen freedom-loving Baloch were killed that day because of the army’s indiscriminate use of heavy weaponry on a tiny remote village. The dead included elder brother and two nephews of Dr. Allah Nazar – Safar Khan, a teacher, and Suleman and Zakir respectively. Many more members of the community were injured and lay helpless without medical aid. The village of Mehi was reduced to ashes, and for many days this tiny village remained cut off from the rest of the world.

Pakistan’s nuclear-armed army shamelessly celebrated its victory on a tiny village in the occupied Balochistan. Following the examples of medieval invaders, the Pakistani soldiers tied the bodies of the deceased Baloch behind their trucks and dragged them for miles on dirt roads to seek revenge and intimidate the villagers. The remains of some deceased were beyond recognition. The survivors in the village who witnessed the barbarism of the Pakistan armed forces lived in fear and uncertainty during the whole period of the operation and remained held in isolation at a nearby school. They were held captive by the assaulting army soldiers and were not allowed to go back to their homes or whatever was left of it.

List of names of the fallen heroes of Mehi village:

“Search and destroy” is a military tactical method and its objective is to insert the ground forces into a hostile territory to flush out the enemy and destroy it with precision, and withdraw immediately afterward. The body count is the measuring tool to determine the success of the operation.  Pakistan army aims are to flush out Baloch guerrillas by search and destroy missions; isolate them from the rest of the population; deny them food and medical supplies, and eventually force them to surrender. The surrendered individuals are then tempted into betrayal to become informers for the Military Intelligence where refusal is not an option.

In his video message, recorded moments before his death; the freedom fighter, Suleman addressed his comrades, and asked his mother not to be saddened but be proud that her son died for the great cause to free his motherland. His message was a call for freedom and struggle until victory. And he conquered death with laughter so loud that its echo will be heard by generations to come.