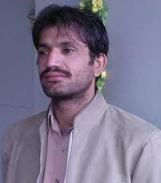 Zarina Baloch, Sister of Martyred Baloch leader Sana Sangat didn’t participated in the funeral of his brother and remained in Karachi and prefers to continue her protest against the arbitrary abductions and extra-judicial killings of Baloch political activists by occupying Pakistani forces in Balochistan.

She says she realized to continue the protest to let the world know what is happening in Balochistan and she did not go to the funeral of his brother along with other relatives.