‘She was brave’: Baloch student from Calgary wins award for tribute to Canadian civil rights leader 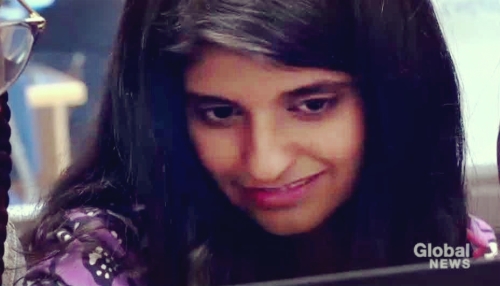 “Girls being told they’re only beautiful and successful if they have fair skin,” Baloch said, “It’s heartbreaking.”

Fatima Mir Baloch has always been thankful that she was able to move to Canada from Pakistan when she was 12 years old.

Now, she’s enjoying the chance to pay tribute to a Canadian hero, a Nova Scotia woman who became a civil rights leader after being evicted from a movie theatre.

“People don’t even know that we had issues like that, that we had segregation,” Baloch said.

Baloch was recognized for her essay on Viola Desmond, whose life changed forever when she went to see a movie in New Glasgow, Nova Scotia in 1946.

“(Desmond) took a seat on the main floor that was reserved for whites only,” Baloch said. “The African Canadians were supposed to sit up in the balcony. The police were summoned immediately and she was dragged out, charged and held overnight.”

The incident sparked Desmond’s interest in civil rights issues, and her work in that area has led to her being honoured with a place on Canada’s new 10 dollar bill, to go into circulation later in 2018.

Baloch’s essay on Desmond paid tribute to her courage.

“It shows how one act committed by one person can lead to better change,” Baloch wrote.

She said she’s heartened to see Desmond getting more recognition.

“She plays a part in Canada today,” Baloch said. “My life here is a product of her fight. She was brave.”