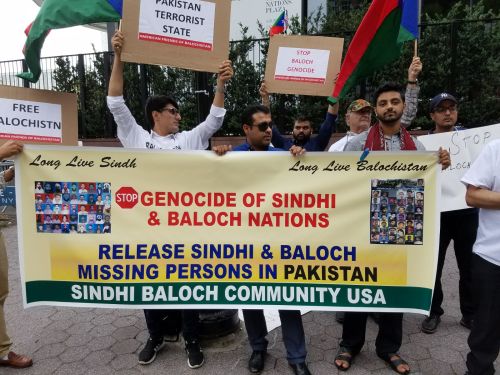 New York, Sept 21 – Baloch National Movement (BNM) and Jeay Sindh Qaumi Mahaz (JSQM) held a joint protest rally outside the UN Headquarters in New York to highlight the gross human rights violations in Sindh and Balochistan. On the occasion of the 72nd UNGA meeting in New York; Baloch and Sindhi activists campaigning for sovereignty of their lands, cultural identity and freedom of thought – gathered to jointly raise their voice against extreme forms of Pakistani military operations, enforced disappearances, torture and mass killings of civilians.

Addressing the media, Nabi Bakhsh Baloch, Secretary General, BNM-North America stated that the ongoing month-long Pakistani military operation in the Kolwah area of Balochistan has resulted in fatalities while a large number of residents were taken away by the soldiers who also set fire to their homes and properties. “For the record”, Mr. Baloch said, “This scenario is not about Myanmar or Rohingya Muslims but Balochistan where Pakistan’s Islamic Army is committing genocide against its own Muslim population. 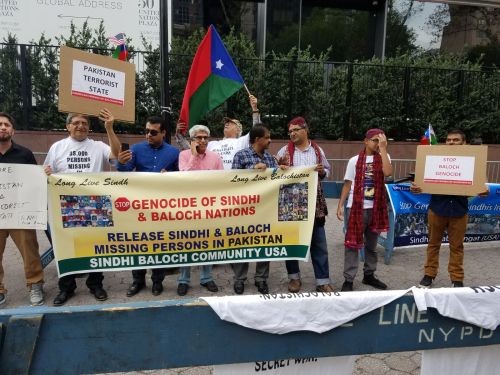 Mr. Baloch informed the media that in retaliation to “Free Baluchistan” poster campaign in Geneva, the Pakistani army abducted two civilians from district Kech, Balochistan and shot them in cold blood. Later their bodies were handed over to the local authorities declaring the two as terrorists killed in counter attack. They were identified by their relatives as Saeed s/o Ameer R/O Rodhbun (Tump) and Amjad s/o Gohram R/O Mand in district Kech, Balochistan.

Mr. Baloch supported President Trump’s South Asia and Afghanistan policy and demanded the international community to declare Pakistan a state that sponsors terrorism as a foreign policy tool. He also strongly condemned China for forming strategic partnership with Pakistan in the genocide of Baloch people. He emphasized that China had no right to use Gwadar port for its expansionist designs in the region to fulfil its energy and military ambitions.

Mr. Baloch stated that a sovereign Balochistan is the need of the hour and important for the region’s peaceful development and political stability.

Urgent entreaty to take action against Pakistan Army war crimes committed against innocent civilian populations and the political dissent in Balochistan and Sindh.

People of Balochistan and Sindh are facing the worst kind of human rights abuses, social injustice, sectarian violence, enforced disappearances, targeted killings, torture and the “kill and dump” policy carried out by Pakistan state security forces and its death squads against political activists. The indigenous people of Sindh and Balochistan are being systematically marginalized through methods employed by the state including cultural genocide, ethnic cleansing, militarization, and promoting religious extremism as a tool to control and radicalize the society to rid it of all humane and democratic values.

Currently, fifty Pakistan Army vehicles and six helicopter gunships are taking part in a military operation in the Kolwah area of Balochistan. The month-long ongoing military crackdown on the civilian population has resulted in several fatalities with a large number of locals gone missing, taken away by the soldiers to undisclosed locations. Homes, shops and businesses of the residents were burnt down by the army to force them out of the route that covers the $54 billion China-Pakistan Economic Corridor in the interests of Islamabad and Beijing. Due to the complete media blackout, it is impossible for reporters to enter the area and inform the world.

Sindh, the historic land of peace, religious tolerance and Sufism is being injected with religious extremism, sectarian violence, forced conversions of Hindu woman and destruction of the Sufi shrines that have always stood as symbols of peace and spirituality by followers of all faiths. Enforced disappearances are on the rise in Sindh, and victims are the political activists who end up tortured and in many cases killed in custody and dumped in the fields. Sindh’s indigenous population is being pushed into economic backwardness by being deprived of the urban development in the major cities of the province controlled by the centre.

People of Sindh and Balochistan demand for an urgent UN intervention to stop the Pakistan state atrocities, gross human rights violations and crimes against humanity committed against civilian populations. Suffering families ask for the return of thousands of Baloch and Sindhi missing persons illegally taken away by the Pakistan Army in the last several years. UN should send a peace and human rights mission to Islamabad to find ways to end all military operations in Sindh and Balochistan.