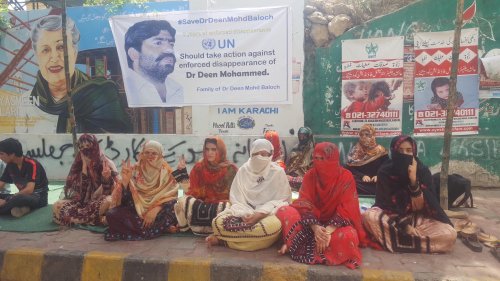 KARACHI: The daughters of an abducted Baloch doctor are on a hunger strike at the Karachi Press Club, demanding the safe release of their father.

On the night of 28 June 2009, Pakistani security forces abducted Dr. Deen Mohammad Baloch, who is also a member of Baloch National Movement, from Ornach area of Khuzdar Balochistan.

His whereabouts still remain unknown since his abduction and his family has been striving for his safe recovery from past eight years.

Sammi and Mehlab Baloch, daughters of Baloch, have been struggling for the release of their father and have knocked the doors of every court in Pakistan.

They even organised dozens of protests, press conferences, held hunger strike camps and Sammi Baloch held a 3000 km “long march” from Quetta to Islamabad along with other victims’ families but failed to get justice from Pakistani institutions and human rights organizations.

Daughters of Baloch have appealed to the United Nations to play its role for the safe release of their father.

Sammi Baloch, elder daughter of Dr. Baloch, said that she has used all the democratic and peaceful channels for her father’s safe recovery but nobody has listened to her plea for help. She said if her father has committed any crime, he should be presented to a court of law and undergo trial according to law.