Three years after his abduction, Zahid Baloch is still missing.

Dear members of the press,

Thank you for joining us today in this briefing on Balochistan and human rights. My name is Karima Mehrab and I am the Chairperson of Baloch Students Organization-Azad (BSO-A). Formed in 1967, the BSO has campaigned for education, development of Balochi as mother language and medium of instruction, and the political rights of the Baloch people in the Pakistan-occupied Balochistan.

Since its inception, Pakistan’s military establishment has considered BSO as one of its top opponent and has often resorted to punitive measures against its members. And since 2005, in continuation of its anti-Baloch policy, Pakistan’s armed forces targeted the leadership of BSO with unlawful arrests and disappearances to put a halt to the organization’s peaceful protests and on-campus campaigns. Thousands of Baloch political activists including hundreds of our members and students have been taken away by the army and kept at secret locations for months and years. All such ‘illegally abducted’ persons are subject to inhuman physical and mental torture. They are commonly called the Baloch missing persons. 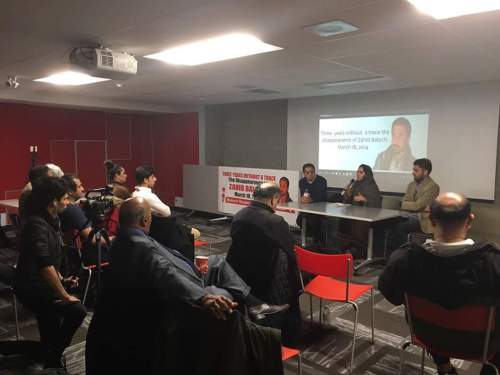 Just when we thought that our lives could not get more tragic, the military initiated the infamous kill-and-dump operations against our members and other Baloch activists. Pakistan army soldiers and their death squads systematically pick up Baloch rights activists from their homes, public transport services, university, colleges and in some cases from hospitals and dump their tortured and bullet-riddles bodies months or years later.

The Human Rights Watch, Amnesty International and the Human Rights Commission of Pakistan have profiled dozens of Baloch victims of enforced disappearances and the kill-and-dump operations. Mass graves were discovered in the Khuzdar district of Balochistan in April 2014 and a total of 179 bodies were unearthed. And recently more mass graves have been found in the Dera Bugti area of Balochistan, which provides evidence of mass killings of civilians by the Pakistani security forces and their death squads.

Our organization’s former Chairman, Zahid Baloch was abducted by the Pakistani military intelligence personnel on March 18, 2014 from Quetta, Balochistan. I am a witness to the abduction of my leader who was pushed into an unmarked vehicle in the presence of the paramilitary soldiers of the Frontier Corps and whisked away. And to this day, colleagues, friends and family members are unaware of his whereabouts. And today, three years after his abduction, Zahid Baloch is still missing. The Pakistani state forces and the so-called elected government are in complete denial of the incident – they have even denied Zahid’s existence as a person. 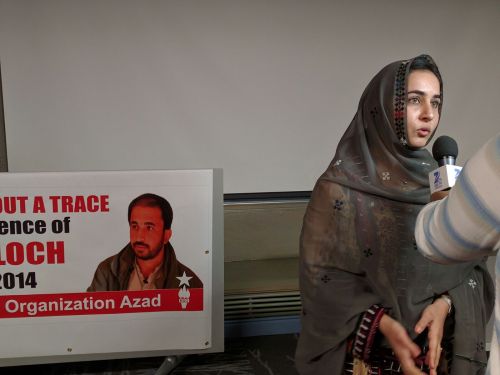 His second son, Qambar, who is now four years old, has no recollection of his father’s memories. The third son, Suleman, who will be celebrating his third birthday in the next four months, was born after Zahid Baloch’s abduction. Along with their mother, his children have spent months outside various press clubs in different cities of Pakistan in the hope that it will somehow help bring back their father.

Zahid’s story is not unique. The agony his family has gone through is also a common every day experience of Baloch families. In today’s Balochistan, every other family has a similar story to tell.

Zakir Majeed, former Vice Chairman, BSO-Azad and student of Balochistan University was taken away by the Pakistan Army soldiers on June 8, 2009. He is missing for the last seven years. His sister, Farzana Majeed, walked thousands of kilometers along with families of other Baloch missing persons from Quetta to Islamabad to highlight the issue of Balochistan’s disappeared youth. Unfortunately, such peaceful protests and helpless voices have fallen on deaf years in Pakistan, ruled by its powerful army with puppet civilian parliaments and rubber stamp courts.

It is important to mention here that the dramatic increase in the human rights violations in the recent times is directly related to the takeover of Balochistan’s deep sea port of Gwadar by China. The strategic alliance between China and Pakistan and the investment of 46 billion dollars by Beijing to build naval bases and airport for military expansion in the Arabian Sea is being strongly opposed by Baloch people. China is equally responsible for the war crimes and crimes against humanity in Balochistan today along with the Pakistan Army.

In the absence of any significant pressure from the United Nations and democratic governments of the world, Pakistan’s military has intensified its operations in Balochistan where foreign journalists are not allowed to visit and local journalists cannot do any meaningful coverage of atrocities for the fear of being killed. Balochistan has been called one of the most dangerous places in the world by the international journalists’ rights groups. Sabeen Mahmud, women rights activist and campaigner for the voiceless in society, courageously hosted an event on Balochistan in Karachi. She could not even make it to her home and was killed by volley of bullets while still seated in her car.

In these circumstances, you don’t even have to be a Baloch rights activist to go missing or get target-killed. By simply being an ethnic Baloch is enough to become a victim of army’s ‘kill and dump’ policy.

Earlier this month, the Pakistani military bombed a house in the Alandoor village of district Kech in Balochistan, seriously wounding a pregnant woman, Fatima, and killing her father in law.

On the eve of March 8, 2017, the International Women’s Day, over two dozen Baloch women were abducted from Balochistan’s Awaran district. And the incident was completely blacked out in the Pakistani media. Because of the remoteness of those villages, journalists and rights activists are unable to get information from the families of the disappeared women.

Respected members of the press,

You live in a democratic country where you do not have to fear for your life when you write or speak the truth. We urge you to help highlight the humanitarian crisis in Balochistan. It really helps. It helps a lot. It saves lives. We have experienced it firsthand. Whenever there has been some media coverage on atrocities in Balochistan in the international press, the frequency of killings and disappearances decreased.

I thank you again for being present here today, listening to the painful stories of our lives

Thank you so much.