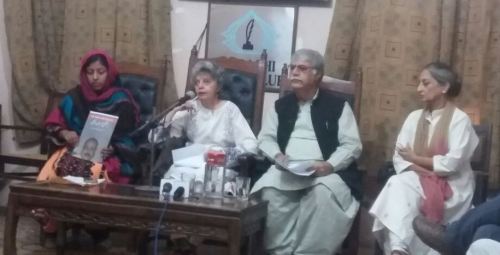 KARACHI: The Human Rights Commission of Pakistan (HRCP) said on Friday that the law enforcement agencies had a misunderstanding with regards to Baloch writer and social activist Abdul Wahid Baloch.

Showing solidarity with a campaign for the safe recovery of literary activist and publisher Abdul Wahid Baloch, a large number of social, human rights and literary activists have expressed their concerned over his alleged forced disappearance since July 26 without his arrest or any charges against him being declared.

Speaking at the Karachi Press Club, provincial vice chairperson of the HRCP Asad Iqbal Butt said that it’s been 120 days since Abdul Wahid went missing, adding that apart from being an activist who participated in several protest camps outside the press club, Abdul Wahid is a “fiction writer having political depth”. He (Abdul Wahid) helped many budding young writers and established thinkers by publishing their work, including magazines, pamphlets and short stories, said Mr Butt.

“His (Abdul Wahid’s) works, whether in Balochi or Urdu, are not hidden from anyone. He is among the founding members of the Syed Zahoor Shah reference library in Malir,’’ he said, adding that the law enforcement agencies misunderstood Wahid’s work and activities. “Apart from that, there doesn’t appear to be any other reason for his prolonged disappearance,” he said.

Giving an update regarding the case, Mr Butt said the HRCP wrote to the prime minister and the United Nations working groups on enforced or involuntary disappearances. “Apart from one or two organisations working for human rights violations, most institutions did not give a response,’’ he said.

Regarding the ongoing hearing in the Sindh High Court, Mr Butt said that the court had ordered the law enforcement agencies to form a joint team to investigate Abdul Wahid’s disappearance, adding that the next hearing was scheduled for Dec 1.

The Senate’s functional committee on human rights has asked the federal and provincial governments to speed up the process for Wahid’s recovery.

Hani Wahid said her family was bearing the brunt of her father’s disappearance and her grandmother was not feeling well and refused to eat. “If my father has done anything unlawful, then please present him in a court of law,” she added.

Ms Yusuf called upon the state to follow the due course required in recovery of a person.