‘It is my constitutional right to know my father’s whereabouts’ : Hani Wahid Baloch

A little over 400 people marched in a procession from Regal Chowk to the Karachi Press Club to protest the disappearance of Baloch social activist Wahid Baloch on July 26, 2016.

They carried placards with pictures of the activist and shouted full-throated slogans such as “Wahid Baloch ko baazyab karo” and “Release Baloch and have pity on humanity”.

It may be mentioned here that Wahid Baloch, a very popular figure among the downtrodden and the financially challenged, went out of his way to mitigate the problems of the poor and, while an employee at the Civil Hospital Karachi, footed the bills of so many people who could not afford it.

He was picked up from the Toll Plaza on July 26 by, according to his daughter Hani, gun-wielding plainclothesmen without serving a charge sheet or specifiying his “crime”.

Among the protesters were his next of kin among whom there was his tearful wife and another elderly lady who were weeping all the while. Whether this would melt the hearts of the kidnappers remains to be seen. The procession was organised by the Human Rights Commission of Pakistan (HRCP). 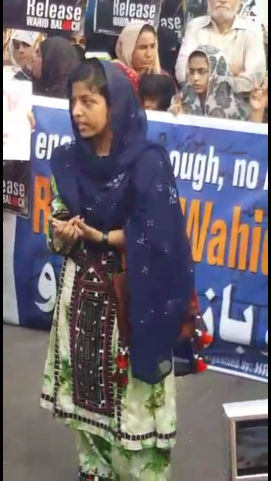 Addressing the protesters at the Karachi Press Club, Baloch’s daughter, Hani, narrated how the gun-wielding plainclothes men had shoved her father into a vehicle and whisked him away to some destination which still has not been determined. She said that it was just yesterday that police had finally registered an FIR.

She said that her father was the most benevolent person and he had no record of anti-state activities. He was just a social activist who just helped the needy. She challenged the concerned authorities to come up with solid proof against him and, if proved right, they would accept whatever came their way.

“They should produce him in a court of law and give him a chance to defend himself. He must be produced before a court of law immediately. We, his next-of-kin who worry for him day and night, have a right to know his whereabouts. That’s our fundamental and constitutional right.” As Hani spoke, one could feel her voice quiver and see tears well in her eyes.

Speaking next, Asad Butt of the HRCP lamented that our rulers had not learnt from the most “shameful” infamy of the separation of East Pakistan and were repeating the same blunders, this time in another province.

He said they should better realise before it was too late that alienating your own people has disastrous consequences. The East Pakistan tragedy, he said, was a massive lesson and that ‘savagery’ with one’s own citizens would eventually backfire on the rulers.