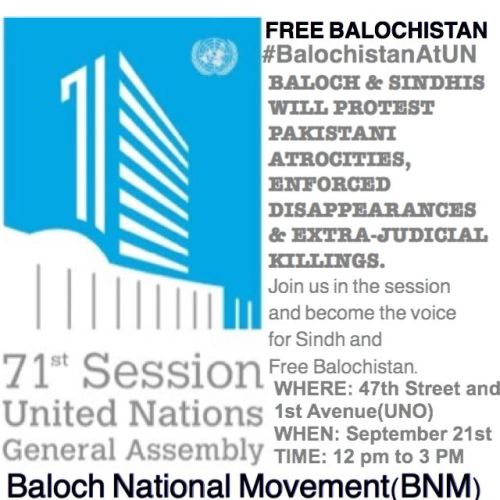 New York, Sept 17: In a statement issued by the Baloch National Movement (BNM) of North America, it was announced that a joint protest of Baloch and Sindhi activists will be held outside the United Nations to protest the Pakistani atrocities and the ongoing military operations in Sindh and Balochistan.

Since 2003, more than 20,000 Baloch political activists have gone missing, illegally abducted by the Pakistani state security forces and their death squads. The victims of enforced disappearances are being tortured and executed in custody in thousands and their lifeless, mutilated, bullet-riddled bodies are then dumped in the fields. The Pakistan army soldiers and helicopter gunships attack civilian settlements and villages on regular basis across Balochistan and entire populations are forced to migrate leaving behind a trail of burned down houses and bodies of executed youth.

China is Pakistan’s strategic partner in the economic plundering and mass murder of Baloch civilians particularly in the coastal belt of the Makran region of Balochistan. The deep sea port of Gwadar has been sold to China for military buildup and expansion into the Arabian Sea. The 47 billion dollar China-Pakistan Economic Corridor (CPEC) is a death trap for the Baloch people in the name of development. An estimated 300,000 Baloch tribal and coastal population has been forced out of their ancestral lands and fishing villages to make room for the Chinese and their security establishment.

Baloch people have welcomed and are grateful for the support extended by the Indian Prime Minister, Narendra Modi at such a critical juncture when our nation is struggling to be free from the illegal military occupation of Pakistan since 1948.

We appeal to the freedom loving people of America and the world to support our demands for freedom, peace, and justice. Join us on September 21st to protest against Pakistan, its jihadist armed forces and the Government of Nawaz Sharif who will be speaking at the UN’s 71st Session of General Assembly in New York.

Protest will be held in front of the UN building in New York on September 21, 2016.