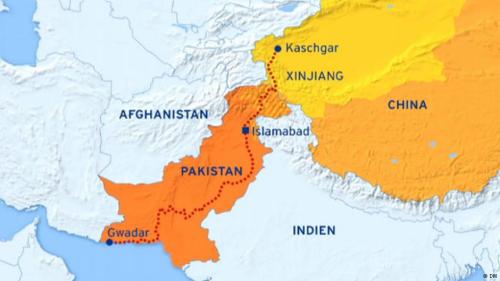 ANI  |  Berlin [Germany] : While Pakistan Prime Minister Nawaz Sharif claims the China-Pakistan Economic Corridor (CPEC) to be a “game-changer” for Islamabad, the project seems to create new conflicts in the country with local communities, ethnic groups and leaders of the smaller provinces completely protesting against it.

The USD 46 billion project is reportedly Beijing’s aim to expand its influence in Islamabad and across Central and South Asiain order to counter the United States and Indian influence.

The CPEC, which would link Pakistan’s southern Gwadar Port on the Arabian Sea to China’s western Xinjiang region, includes plans to create road, rail and oil pipeline links to improve connectivity between Beijing and the Middle East.

With Pakistan grappling with an acute economic crisis, experts say that CPEC can certainly stir the much-needed economic activity in the country, reports DW.

The project has been opposed by local communities, ethnic groups and leaders of the smaller provinces.

Those against the project say that Pakistan’s most populous and politically strongest province, Punjab, wants to reap all the benefits while using their lands and resources to implement it.

The signs of an imminent conflict have already emerged from the northern Gilgit-Baltistan region to the western Balochistan and southern Sindh provinces.

The DW quoted Syed Masood Alam, an expert based in the northwestern Waziristan region, as saying that the military and civilian establishments had changed the route of the economic corridor for the benefit of Punjab.

He added the people of Khyber Pakhtunkhwa, Gilgit-Baltistan, Balochistan and Sindh provinces are against the CPEC in its present form and will go to any extent to oppose it.

Despite all the unrest, Islamabad has ignored the concerns of the local communities and their leaders and vowed to continue with the CPEC at all costs.

The military has declared those opposing the CPEC are against Pakistan’s economic prosperity and are “traitors.”

Pakistani Army Chief General Raheel Sharif recently remarked that the security forces will not stop unless they achieve their end objective of a terror-free Pakistan irrespective of the costs.

Experts, however, say that the army is aiming to take an upper hand in the implementation of the economic corridor plan.

Brussels-based South Asia scholar Siegfried O. Wolf in a paper on the CPEC said that the project would entrench the military in the country’s politics and subsequently harm any attempt to bring the country back into the process of democratic transition.

He even gave examples for autonomous decision-making by the military, which include the Karachi security operations, the Zarb-e-Azb operation.

Reports suggest that fight over the control of Pakistan’s economic hub and port city Karachi has also intensified as the security forces continue to crack down the city’s most popular political party, the Muttahida Qaumi Movement (MQM).

The project has, however, given spark to another issue, which is human right violation by the Pakistan Army on the people of Balochistan.

The Baloch separatist groups have all vowed to resist the CPEC as it exploits their resources and rights.

Rejecting China’s interference in Balochistan over CPEC, the Balochistan Republican Party (BRP) activists earlier said that Islamabad wants to build the same in the region on the dead bodies of Baloch people with Beijing’s help.