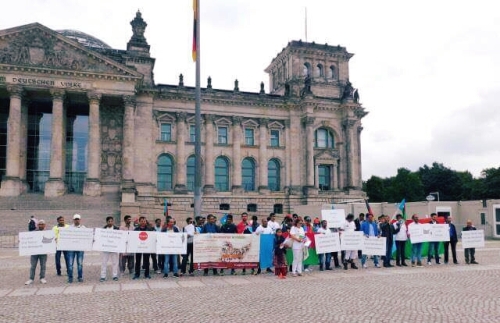 “We should organise ourselves in Europe and inform the world about Balochistan’s illegal occupation and the human rights violations that followed the occupation,” a pro-freedom Baloch leader said.

BERLIN: The Free Balochistan Movement (FBM) long march reached German capital Berlin on Thursday evening and held a protest demonstration outside the German parliament on Friday. The Baloch activists’ long march kicked off from Germany’s Dusseldorf city on 16 July, 2016 after the pro-freedom Baloch leader Hyrbyair Marri had announced an international awareness campaign on 9 July, from the platform of Free Balochistan Movement. Nearly a dozen pro-liberation Baloch activists took part in the long march and walked for 20 Days to reach Berlin.

The marchers held protest demonstrations and distributed leaflets in different German cities on their way. It is the first ever long march in Europe that Baloch activists have organised and the response of people has been very supportive and appreciative. People in Balochistan have also showed their support to the long march by wall chalking in support of Free Balochistan Movement.

On Friday, outside the German parliament, participants in the demonstration strongly condemned the Pakistani state for their genocide policies and human rights violations against the Baloch people. They said that Pakistan was a terrorist state and was violating international human rights laws. They urged the UN and other international human rights organisation to take notice of Pakistan state atrocities in Balochistan. The speakers also charged that Pakistan was involved in promoting religious extremism in the region and around the world. They held Pakistan responsible for religious terrorism in Afghanistan, Balochistan, India and in Western countries.

A message of pro-freedom Baloch leader Hyrbyair Marri was also read out during the demonstration. Mr. Marri in his message has congratulated the Baloch activists in Germany for the successful long march. “You have shown your true dedication to the Baloch national struggle, and represent the genuine aspiration of the Baloch nation.”

He said that it would have been impossible to organise such a march from one city of Balochistan to another because Pakistan has turned Balochistan into a military garrison where a native Balochistani will be stopped and searched several times before reaching from one town to another. Whereas in Europe and other Western democratic countries people have freedom to exercise their right to freedom of speech and peaceful demonstration.

“We should organise ourselves in Europe and inform the world about Balochistan’s illegal occupation and the human rights violations that followed the occupation,” Mr. Marri said.

Addressing Baloch Diaspora activists, Hyrbyair Marri said, “Today, there are hundreds of Baloch who are forced to live in exile because of on-going human rights violations by Pakistan. We can and should be the voice of our people on the ground, and expose the Pakistani state barbarism in Balochistan. Pakistan conducted four major military operations against the Baloch national liberation struggle – since 27 March, 1948 when it forcibly and illegally occupied our sovereign country – Balochistan.”

“Each one of us now have to be the voice of our downtrodden people, and act as the ambassadors of Balochistan. The previous four military attacks on Balochistan, and the countless number of people disappeared, killed and expelled from their home almost went unnoticed because there was no one to speak for the Baloch nation on an international level,” he added.

The Baloch leader said, “Currently, Pakistan is engaged in its fifth attempt to destroy the Baloch freedom struggle, but the present phase of the Baloch liberation struggle is better organised and more widespread, that’s why our enemy – Pakistan – is carrying out increased brutal military operations and attacks against innocent Baloch civilians, it is because they can see their defeat and the success of Baloch struggle. The enforced-disappearances, extra-judicial killing, indiscriminate bombing of Baloch villages and targeted killing of the most conscientious and educated youth in Balochistan are signs of weakness and frustration of the enemy state – Pakistan.”

Mr. Marri in his message thanked the Afghan and Indian people and their social media activists for supporting the Baloch freedom movement. He also reiterated his previous point that the Afghan and Indian governments, and all other free nations should include Balochistan in their foreign policy decision making, and support the Baloch national liberation struggle politically, morally and diplomatically at all forums.