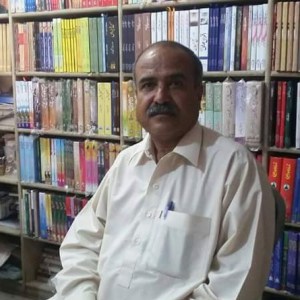 KARACHI : Wahid Baloch is well known in all the literary circles of Balochi language for his unconditional and tireless supports to promote Balochi language, especially when it comes to publications.

Mr. Baloch has been working as Editor in a monthly Periodical “Labzank” (Literature), as well as supporting all the publications in Balochi Language for decades. He was helping all the Baloch individuals/groups whoever wanted to publish a book in Balochi in Karachi, as the most available place to publish a book in Pakistan, was Karachi, for Baloch.

He is in-charge of Sayad Hashmi Reference library in Karachi, which was established by Professor Saba Dashtyari, who was killed by same kind of “Unknown Gunmen” near an Army Check post in Quetta, capital of Balochistan, in June 2011.

Wahid Baloch was traveling from Interior Sindh to Karachi, his home when the public transport in which he was traveling was stopped almost near Karachi and unknown gun men picked him up and took him with them on 26 July 2016.

Whenever it is said, “Unknown Gun-Men” in Pakistan, it means armed groups associated with state, be it civil/military wing of Intelligence Agencies on a task where they don’t want their identity to be known by public clearly or the security personnel without uniform and/or small armed groups operating under supervision of Security Establishment.

Hundreds of Baloch people have been abducted by these “Unknown Gunmen” throughout decades and later the dead bodies of the abducted person has been handed over to public hospitals by Military or person had been released after some time. While in most of the cases tortured dead bodies have been found in desolated areas.