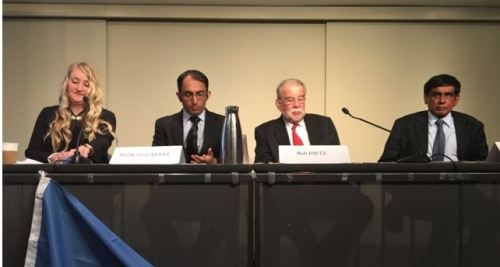 The UNPO conference was aimed at discussing the conflict in Balochistan, analyzing its impact on the state of human rights, press freedom and the way forward.

WASHINGTON DC: The Unrepresented Nations and Peoples Organization (UNPO) organized a one-day conference at the Carnegie Endowment for International Peace on Tuesday to discuss the conflict in Balochistan, analyze its impact on the state of human rights, press freedom and the way forward.

Senator Paul Strauss of Washington D.C. welcomed the conference participants to the U.S. capital and applauded UNPO for organizing the event. He noted that Washington D.C. was also a UNPO member because it still does not still enjoy the status of a full state in the U.S.

The conference was divided in three panels.

The first panel, which focused on the state of human rights, was addressed by T. Kumar, Director International Advocacy at the Amnesty International, Bob Dietz, Asia Program Coordinator at the Committee to Protect Journalists (CPJ) and Malik Siraj Akbar, President of the Balochistan Institute and the Editor-in-Chief of the Baloch Hal.

The panelists expressed disappointment over the prevailing culture of impunity in Balochistan where in spite of credible evidence about the state officials’ involvement in all kinds of human rights abuses, no perpetrators have been brought to justice. The speakers called upon all stakeholders involved in the conflict to make efforts to minimize violence in Balochistan because ordinary citizens have had to pay a heavy price in this conflict.

Waheed Baloch, a former Speaker of the Balochistan Assembly and the President of the International League for Peace and Justice, insisted that the Baloch conflict should be seen more broadly instead of being confined to a mere human rights issue. He provided an in-depth historical account of the Kalat State and said world powers should support the Baloch people fighting the Jihadist forces in Pakistan backed by the army and its intelligence agencies.

Michael Hughes, an American journalist, criticized the U.S. foreign policy and regretted the State Department’s lack of interest to probe the situation in Balochistan and speak about it.

Jean Lambert, Member of the European Parliament, Chair of the Delegation for Relations with the Countries of South Asia, called for a ceasefire in Balochistan and urged Islamabad to comply with the Six-Point demands of former Balochistan Chief Minister Sardar Akhtar Mengal.

Seasoned author and broadcaster Tarek Fatah urged the Baloch to be more proactive in asserting their demand for a free Balochistan and remain cognizant of the ‘highly sophisticated enemy’ they were facing because, he added, Islamabad spends millions of dollars lobbying in Washington D.C. in putting its narrative forward.