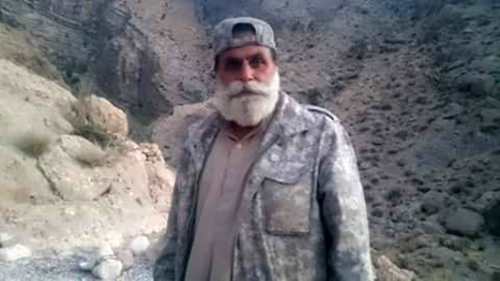 By spreading such propaganda, they first want to weaken the will of the Baloch and then launch a full-fledged operation to kill everyone

Home Minister Balochistan Sarfaraz Bugti claimed the previous day in a press conference that Bangulzai had been killed along with 34 other militants in the Kalat area. He was being accompanied by the provincial government’s spokesman, Anwarul Haq Kakar.

However, multiple sources in the Baloch separatist groups and UBA rubbished the government’s claim.

What about the photo, making rounds on the social media, of a bullet-riddled body who looks like Bangulzai?

“Yes he looks like him because every Baloch in his age keeps a similar beard and a mustache. But look at his facial features. Not him,” the UBA source said.

However, the second time the government claimed killing BLA’s Aslam Baloch, no official statement has since been released from his group to confirm his status. All others are confirmed alive, according to multiple sources.

Bangulzai is a veteran of the Baloch liberation movement who also took part in the 1970s’ insurgency. He was the leader of the Baloch Students’ Organization when that insurgency started after Zulfikar Ali Bhutto dismissed the elected NAP-led nationalist government in Balochistan. He left his university and the students’ group to join hands with the militants.

Since then, he has been a close aide of the late Baloch leader, Khair Bux Marri, considered by many as the father of the modern Baloch nationalism, which has been marked by armed resistance against Pakistan.

Bangulzai was arrested in 2000, accusing him of killing a Balochistan High Court judge belonging to a clan of Marris who have turned against their tribal chief, Khair Bux Marri.

Bungulzai remained jailed for many years in Quetta along with Marri until he was released in 2008. Since then he has been taking an active part in the current Baloch armed resistance.

After the differences between Marri’s two sons – Hairbiyar and Mehran – the BLA split into two groups in 2012, and Bangulzai have been leading the BLA’s splinter group, UBA, since then.

The Pakistan military has stepped up operations against Baloch militants after it signed a deal with China on the Pak-Sino Economic Corridor projects, under which china will invest over 40 billion dollars in the next 15 years on energy and road infrastructure. Pakistan considers the deal instrumental for the survival of its flagging economy.

However, China has allegedly been demanding assurances of a peaceful implementation of the deal, especially in Balochistan, where Gwadar’s deep sea port is located. Also the roads network linking the port to China passes hundreds of kilometers into the restive Balochistan.

“Balochistatn is a huge territory. Securing these roads network is way impossible. How many troops are they going to deploy?” said Taj Baloch, a Baloch activist and writer living in Sweden.

What does the government want to achieve by spreading rumours about the killing of important Baloch militant leaders?

“To weaken the will to fight. In these circumstances, when the Baloch groups lack proper coordination, such rumours have an effect as many are going to believe them. By spreading such propaganda, they first want to weaken the will of the Baloch and then launch a full-fledged operation to kill everyone,” said Mr Baloch.

The military’s operation had been in bits and pieces. But, since last year after the deal with China, they have initiated multiple operations simultaneously against all major separatist camps across Balochistan.

The spokesperson for the Baloch Republican Party (BRP), Sher Mohammed Bugti, argued that Pakistan was just trying to assure China that they had cleared Balochistan for the Chinese investment by spreading such “lies”.

“According to our sources, Mir Abdul Nabi Bangulzai is well and alive,” he said.

He said Musharraf had also said he had cleared whole Balochistan except for Dera Bugti a long time ago. “Was that true? No.”

Pakistan’s military establishment is now firm on getting rid of the Baloch nationalist militancy for once and all. People like Bangulzai have the operational experience which is key to the survival of the Baloch groups. They can’t afford to lose people like him. They have already lost many and they have suffered the consequences – the groups keep splitbting and the coordination among them gets weaker and weaker.