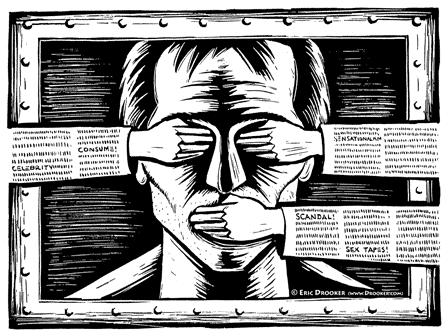 My own experience with Pakistan’s harassment techniques began in May of 2011 when I received an email threatening me with gang-rape by an entire regiment.

Pakistan’s military and intelligence agencies are waging a nasty war on U.S.-based scholars whose writings and public statements undermine cherished narratives promulgated by the army that has dominated Pakistan’s governance for most of the state’s existence. These agencies aim to intimidate, discredit, and silence us. Their tools are crude and include: outright threats; slanderous articles in Pakistani papers and other on-line forums; an army of trolls on twitter and other social media who hound us; and embassy officials who attend and report on our speaking events on Pakistan. But we are lucky to be in the United States: Pakistan’s khaki louts disappear, kidnap and/or kill their critics within Pakistan

My own experience with Pakistan’s harassment techniques began in May of 2011 when I received an email threatening me with gang-rape by an entire regiment. I had received a grant from the American Institute of Pakistan Studies to complete research for my book “Fighting to the End: The Pakistan Army’s Way of War” and had intended to spend the summer of 2011 in Islamabad and Lahore. As I already had a valid, multiple-entry visa they could not use visa denial as an instrument of coercion to influence my writings before my planned visit. So, they tried to intimidate me with this threat of physical harm.

At first, I was incredulous that this email was sent by the “deep state” and I did not immediately call off my travel. Serendipitously, my flight to Dubai was cancelled. While I rebooked my travel, Pakistan’s then ambassador Husain Haqqani reached out to me to tell me simply “You have to cancel your trip. The crew cuts are after you.” Other embassy officials told me privately that the ISI distributed a circular about me at the Pakistan embassy. One officer asked me “You are in trouble. What did you do?” I was sickened by the situation. Officials from the embassy were, and presumably are, not allowed to meet with me.

When I confronted Brigadier Butt, the then ISI station chief at the Pakistan Embassy and Defense Attaché –it became clear that he was personally angry with me because he had seen or had heard about my book proposal from a small number of persons who had seen it. He said that he felt let down because the army had given me considerable access yet I was writing, what he called, an anti-army book. I explained to him that I was doing my job by being willing to go to Pakistan through various grants–despite the security environment–to hear their side of the story. I also told him that granting interviews to scholars is not tantamount to buying scholars

Since 2011 I have inspired several “planted” stories that have appeared in Pakistani papers and obscure blogs alike. These artless rants would be amusing if they were not dangerous. On one occasion, an article actually gave information about where I was staying in Pakistan which was a clear intent to cause me harm or signal the ability to cause me harm.

In the fall of 2014, two videos were circulated about me that had the imprimatur of the army’s media-management organization, the ISPR. The videos included (not very danceable) sound tracks which were taken from ISPR-produced entertainment. Since these videos were published on Youtube, which is banned in Pakistan, the obvious audience of these productions was Pakistanis outside the United States. (Both of these videos have since been removed.).

In early February, The News, published an article that alleged that I have nefarious links with Baloch insurgents. The Baloch are an ethnic group in Pakistan which resists inclusion into the state and its reliance upon Islam as a tool to blunt Baloch ethnic aspirations. Pakistan’s security forces have waged five waves of brutal military oppression, sometimes with U.S. weapons systems, which has been widely decried by international as well as Pakistani human rights organizations.

Despite these well-documented abuses–which includes disappearances, torture and murder by Pakistan’s security forces–the United States has not levied Leahy Sanctions as required by U.S. law. The ISI has worked tirelessly to keep its actions in Balochistan a dark secret.

So why did Pakistan write such an article about me? I have several suspicions. First, I was included on a successful National Science Foundation grant to study the Baloch conflict. Second, as a part of this study, I have reached out to Baloch dissidents to hear their side of the story. Third, I tweet about the tragedy in the state and encourage my government to apply applicable laws and deny security assistance to those units involved in these abuses. Fourth, there will be a publication emerging from this effort. Since I cannot go to Pakistan, what was the intent of the essay? Ultimately, I believe it was coarse attempt at bullying me by targeting my employer and jeopardizing my job security and trying to cast aspersions upon my credibility within U.S. government agencies. According to the article:

It is not clear if Georgetown University was aware of Ms Fair’s plan to meet the leader of Baloch dissidents. It further remains to be seen if US authorities would take notice of Ms Fair’s contacts with such leaders. Her penchant for aggressive attacks on Pakistan that goes beyond inciting violence is not a secret.

Another recent attempt to malign me and several of my colleagues was published in the Pakistan Observer in mid-February. This piece was written by a former Pakistan air force group captain and “TV Talk Show Host” named Sultan M Hali. Hali’s musings are widely available on the internet and they invariably defend the ISI and the army while protesting criticisms about Pakistan’s long-standing policy of using Islamist militancy under its nuclear umbrella as tools of foreign policy. He, like countless retired Pakistan service personnel, populate Pakistan’s print, radio and televised media as a part of the deep state’s discourse construction and message managing efforts. In fact, Pakistan’s intelligence agency, the ISI, has a media management wing dedicated to such efforts.

In this piece, Mr. Hali maligns my fellow colleague, Irfan Nooruddin (whose name he misspells) as a “highly biased scholar of Indian origin.” Professor Nooruddin’s work on electoral politics in India is well-regarded and cannot be characterized as “highly biased.” (It should also be noted that he does not even write on Pakistan.) For Mr. Hali and the Pakistani deep state he defends, Professor Nooruddin’s ethnicity is the basis of this dubious charge: it is rank, racist xenophobia at its worst. What did Professor Nooruddin do to elicit this slander from this amanuensis of the deep state? He had the hubris to host Ambassador Husain Haqqani who discussed his newest project titled “Reimagining Pakistan” at Georgetown under the auspices of the India initiative that Professor Nooruddin heads.

Mr. Hali, who did not attend the event, was riled that the event “featured Pakistan’s most loud critics [sic] n the town including Christine Fair and Hussain Haqqani.” While Mr. Hali did not attend the event, Mr. Bilal Hayee did. In fact, Mr. Hayee is a frequent monitor of such events where he takes note of who attended and what was said by whom. This has a chilling impact upon freedom of speech of students and persons of Pakistani origin and he, and his colleagues at the embassy, know it.

Mr. Hali furthered that Georgetown has established an India initiative with “US $10 million of which large part is known to have come through the Indian Diaspora while part of it has been funded by US administration.” To say that this is a blatant lie is an understatement: the India initiative is extremely modestly funded. Hali opined that “Contrary to the natural objective of fostering closer partnership between US and India, Georgetown,” the event was really an opportunity to malign and defame Pakistan.

Mr. Hali also used this missive as an opportunity to criticize Farahnaz Ispahani who recently wrote a devastating book on the plight of Pakistan’s minorities. Hali, upon trivializing the well-documented abuses that Pakistan’s religious minorities routinely endure, made much of Ms. Ispahani’s book discussion at a well-regarded Indian think-tank called the Observer Research Foundation (ORF). He claimed erroneously that the ORF is funded by Indian intelligence and suggested that Ms. Ispahani, and her husband Ambassador Haqqani, are paid stooges of Indian intelligence. It should be noted that ORF is supported by the Reliance group rather than the Indian government.

Pakistan’s boorish campaign of slander against scholars and journalists whose work discomfits the deep state has even drawn the attention of Pakistani bloggers who have expressed concern about the ham-handed approach adopted by the military and intelligence media handlers. In 2011, even Ejaz Haider, a well-known pro-establishment journalist, questioned this role of the military and intelligence agency after the high profile killing of a journalist named Syed Saleem Shahzad. The chief suspect is Pakistan’s intelligence agency, the ISI. In the wake of that tragedy, Haider wrote of ISA media operations:

What is this Media Management Wing of the ISI? What right does this wing have to invite journalists for ‘tea’ or ask anyone to file a story or file a retraction? The inquiry commission should also look into the mandate of this wing and put it out to pasture.

However, there is little chance of Pakistan doing so.

In addition to poorly-written “filed stories” festooned with calumnious fiction, Pakistan’s military and intelligence agency trains a menagerie of bots and trolls who harass persons like me on Twitter and Facebook and to promote and defend the state, including its terrorist assets.

Whereas the Pakistani government incentivizes scholars to watch what they write and say about Pakistan by holding visas and official meetings hostage, I was declared “Persona Non-Grata” long ago and cannot get a visa. Without such leverage, the Pakistani deep state hopes that all of this harassment and haranguing will coerce me into silence. But the ISI should know this: I will write. I will not be silenced by their brutish antics.

If Pakistan’s armed forces and intelligence agencies are afraid of a few scholars and their facts and key boards, how can they confront Pakistan’s real enemies who are the hordes of terrorists it once nurtured but who have turned their guns and suicide vests against their erstwhile patrons? With apologies to Monty Python, I will continue to write in their specific direction.

C. Christine Fair is an associate professor at Georgetown University and is the author of Fighting to End: The Pakistan Army’s War of War (Oxford University Press, 2014).

One response to “Pakistan’s War on Scholars”