Toronto, Jan 31, 2016: Battling the sub-zero cold, a significant number of Baloch Canadians took part in a downtown Toronto rally to vent their anger at the Pakistani civil and military establishment for the cold-blooded murder of Dr. Mannan Baloch, Secretary General, Baloch National Movement (BNM) in Balochistan.

Dr. Baloch, his three colleagues and a nephew were murdered in execution style by Pakistan Army’s Special Forces in the early hours of Saturday, January 30th in the restive Balochistan region where the army is currently engaged in a bloody campaign of genocide and ethnic cleansing of the indigenous population.

Karima Baloch, Chairperson, BSO-Azad stated that the political assassination of Dr. Mannan Baloch and his colleagues is a crime against humanity and the international community should take notice of such violations occurring in Balochistan on regular basis with impunity. She said Balochistan is at a critical juncture in its history and common people are suffering because of Pakistan’s unlawful occupation, exploitation and selling out resources to countries like China.

Tarek Fatah, author and columnist for Toronto Sun condemned the execution style killing of Dr. Baloch and his colleagues by the Pakistan’s jihadist army. Mr. Fatah noted that the 1948 military invasion of Balochistan by Pakistan was a historic crime that has now become a cancerous growth upsetting the regional peace and stability. He demanded complete sovereignty for Balochistan.

Zaffar Baloch, Convener, BNM – North America expressed his thoughts on the targeted murder of Dr. Baloch and said that the loss of BNM’s leading figure will be felt deeply for a long time to come. The struggle for Balochistan’s freedom has presented great sacrifices including the targeted murder of Chairman Ghulam Mohammad, Balaach Marri, Nawab Akbar Khan Bugti and thousands of youth activists, intellectuals and writers. This struggle will continue till the final victory over the forces of occupation and complete independence.

Kashmiri supporters of the Balochistan struggle for rights and freedom took part in the protest rally and condemned the Pakistani military’s murderous campaign of eliminating Baloch leaders. Mumtaz Khan of Kashmir United Party expressed his solidarity with the people of Balochistan.

The participants chanted slogans against Pakistan, its army and the so-called Islamabad-controlled puppet regime of Balochistan involved in the murderous campaign of eliminating Baloch leaders and activists. The protest ended with an emotional and defiant act of burning of the Pakistani flag by the participants. 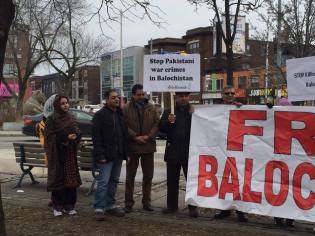