Asst. to Pak undermines the efforts of World Powers against terrorism and religious extremism: Khalil Baloch 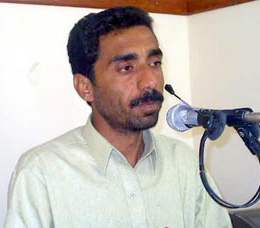 BALOCHISTAN: The chairman of the Baloch National Movement (BNM), Khalil Baloch has stated that consistent financial and economic assistance to a rogue terrorist state like Pakistan will undermine the efforts of World Powers against terrorism and religious extremism. Strengthening itself through aid, loans and patronage of the  United States, China and other powers, Pakistan is not only committing genocide of the Baloch but also becoming a serious threat to the entire region and to world security.

Khalil Baloch said that China’s interests in occupied Balochistan, especially its massive investment in the China Pakistan Economic Corridor (CPEC) deserves condemnation; it is not only strengthening Pakistan’s occupation of Balochistan but also making China a party to the conflict in Balochistan including  the Baloch genocide, the pillaging of Baloch resources and the war against the Baloch nation.

Support from World Powers, particularly the United States of America, in military aid and know-how in the name of the War Against Terror, especially, the transfer of Drone technology to Pakistan will make the region and the world more dangerous and increase Pakistan’s capacity to further intensify its atrocities against the Baloch and its other minorities, namely, the Sindhis and Pashtuns. We have voiced our concerns regarding the World Power’s support to Pakistan and its impact on Pakistan’s ability to commit war crimes against the Baloch nation that so far, agonizingly, has been ignored by World Powers and Human Rights Institutions is alarming.

Chairman Khalil added that Pakistan continues to consider Afghanistan its strategic backyard, a colony, and is continuously pushing it further deeper into civil war using Pashtuns on both sides of the Durrand Line to serve its imperialistic interests and preserving the Durand Line in the process. The Pashtun leadership in Pakistan, rather than working towards the reunification of the Pashtuns has chosen to strengthen Pakistani policies against the Baloch. Pakistan’s Afghan policy has been a disaster for Afghanistan and Afghan society. Pashtun leaders must contemplate and develop a clear policy to handle the situation that Pakistan continues to subject them to.

The Chairman further added that the BNM stresses that terrorism will not be eliminated as long as the World Powers continue to support Pakistan, rather, it will increase; Pakistan itself is the original source of terrorism.

Today it is necessary for World Powers to support the Baloch Freedom Movement based on the ideology of nationalism for the purpose of human survival and sustainable peace in the region. Otherwise, for as long as Pakistan exists, peace will remain a dream and the blood of innocents will continue to be shed.