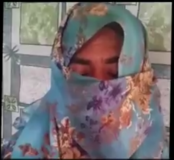 This video clip comprises views of a woman abducted by Pakistan army from Kolwah, Awaran on the first day of operation and later released.

The operation started with bombardment of Pakistani gunship helicopters and jets on July 18, 2015, it was the first day of Eid al-Fitr. Pakistan Air Force (PAF) fighter jets were followed by gunship helicopters and ground forces which sieged the villages of Malaar, Zeerak, Wahli, Rahimo Bazar, Syed Haji Ziarat, Gwaro, Bashoshag and surrounding villages and hamlets.

Local sources confirm at least a 100 + innocent villagers being killed so far in the brutal operation. Till date (27 July, 2015) these villages are sieged by Pakistan army, all exit and entry points are blocked. This woman’s horrific experience could be witnessed in this video.

Filed under Interviews and Articles, Video