By protecting our Language, we protect ourselves : Mumtaz Baloch 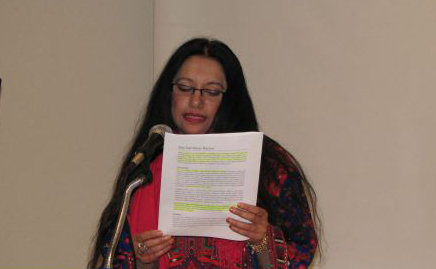 Toronto: International Mother Language Day was observed by Baloch, Azerbaijani, Turkoman and Ahwazi Arab communities in Toronto to honour their culture and heritage under repressive occupation of Iran and Pakistan.

Addressing the event Mrs. Mumtaz Baloch the spokesperson of Baloch Human Rights Council (Canada) said, the Baluch Language is the principle language of the Baluch People.  The Baluch who are now widely spread over the world have managed with difficulty to maintain their language.  We all know Mother Language is the first social contact of a human being that will lead to knowledge.

Baluchistan is today going through a phase of Cultural and Physical genocide.  The Iranian and Pakistan regimes are engaged in mass prison executions of Baluch youth and complete repression of cultural and language rights of Baluch, Kurd, Ahwazi-Arabs, Azeri Turks and Turkoman people.

Denial of such basic human needs to a child or people is the basis for ignorance, intolerance, loss of identity, culture, genocide and war.

Languages are who we are.  By protecting them, we protect ourselves.  Basic education is provided in the Mother Language at least in its initial stages.

The Late Nelson Mandela once said:-

“If you talk to a person in a language he understands, that goes to his Head.

If you talk to him in his language, that goes to his Heart.”