BALOCHISTAN: A militant group in Pakistan’s restive Baluchistan province has threatened a press club with “action” unless it expels its Christian journalists, club authorities said.

“You call yourself faithful Muslims, while under your watch Christian journalists are working against Islam,” the letter, written in the Urdu language, stated. 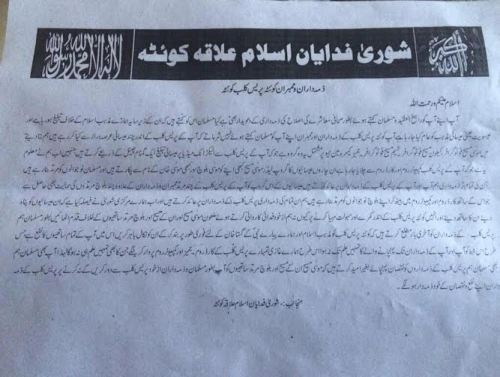 The letter named four Christian photojournalists who are members of the press club, accusing at least one of converting Muslim youth. The letter goes on to warn press club authorities that Fidayan-e-Islam would “initiate action” if they did not expel the Christian journalists.

Two of the Christian journalists named in the letter confirmed its contents to ucanews.com and said they had never attempted to preach Christianity in their work.

“There is no truth in what has been claimed in the letter,” James, who uses a single name and is one of the targeted journalists, told ucanews.com.

Irfan Saeed, president of the Balochistan Union of Journalists, denounced the threats against media professionals and decried the worsening situation for press freedom in the province.

“Baluchistan has become the most dangerous province for working journalists in Pakistan. Forty journalists have been killed in acts of violence during the last 10 years,” he told ucanews.com.

Saeed said journalists in the province often find themselves caught in the middle, facing threats from both sectarian groups as well as Baluch separatists.

“When we don’t report activities of banned militant outfits, we face threats from them, and if we do we have to face court cases,” he said, adding that nine cases have been lodged against working journalists in Baluchistan in anti-terrorism courts.