The life of Nasrullah Baloch is in danger: AHRC 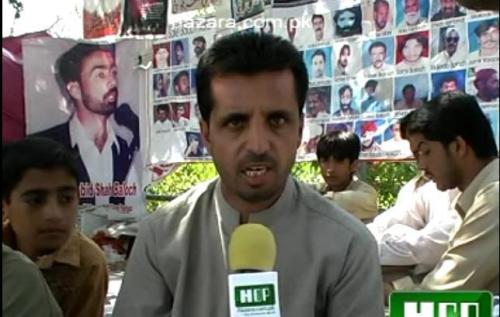 PAKISTAN: The life of Nasrullah Baloch is in danger; persons in plain clothes threaten to eliminate him if he pursues the cases of missing persons

The Asian Human Rights Commission (AHRC) has received information regarding threats to the life of Nasrullah Baloch, the Chairperson of the Voice of Baloch Missing persons (VBMP) and a prominent human rights defender, for pleading the cases of missing persons in the higher courts and before the international community. His two younger brothers were abducted, tortured and released after being told by officials of the intelligence agencies that if their brother did not stop campaigning against disappearances he would be eliminated. The Supreme Court, on more than one occasion, also ordered the police of Quetta to file First Information Reports on the threats but the police, under the influence of military intelligence, failed to comply.

The state intelligence agencies are conscious of the threat to their practice of abduction, keeping incommunicado, torture and extrajudicial killings of persons after the country-wide long march of family members of the missing persons under the banner of the VBMP.

Mr. Nasrullah Baloch, son of Dad Mohammad, chairperson of Voice of Baloch Missing Persons, has been receiving threats for more than a year from unknown persons who claim to be from the state intelligence agency, the ISI, to stop the campaign against disappearances and extrajudicial killings. His two brothers were told by persons from the intelligence agencies that if they cannot stop their brother then he would be ‘dealt with’.

On 25 and 26 March, Baloch was present in a Supreme Court hearing where he was representing the cases filed for the recovery of missing persons. Military and intelligence officers also attended the court proceedings. During the hearing representatives from the Norwegian mission arrived to attend the hearing regarding a Norwegian citizen, Mr. Ehsan Arjumandi. Mr. Arjumandi has been missing since August 2009, after his arrest by plain clothed persons, who claimed to be officials from an intelligence agency, Please see the AHRC Urgent Appeal of 14 August, 2009: PAKISTAN: A Norwegian citizen and Baloch activist is missing after his suspected abduction by Pakistan state agents

The head of the Norwegian mission also talked to Nasrullah Baloch about the cases proceeding on missing persons during the court break hour. The military officers present saw this exchange and made angry and threatening signs towards Baloch. At the conclusion of the court proceedings he was followed overtly by plain clothed persons back to his hotel where he was staying in Islamabad, the capital of Pakistan.

On 26 March, after the court hearing he went to his travel agent for the confirmation of his flight back to Quetta, the capital of Balochistan, the intelligence officials followed him. At the Blue Area market they stopped Nasrullah and demanded that he show them the air ticket. They tore up the air ticket and said him, “You are traitor and briefing the Norwegian mission, the foreigners about the missing persons”. They threatened him that if he does not stop maligning the security and intelligence agencies he would be killed, just like other persons.

In the evening when he was proceeding to the airport he was stopped at a check post and was thoroughly searched. As he proceeded further after clearance, he was again stopped by plain clothed persons who demanded to search his luggage as they had information that he was carrying arms with him. He was also subjected to a body search again before being allowed to go.

As he entered the airport lounge a person approached and told him that he had been lucky this time because they could have put a pistol in his luggage during the search so that he could be arrested for carrying arms into an aircraft for bad intentions. He also told Baloch that they had searched his hotel room where he was staying and that no place is out of their reach. Baloch was threatened again not to visit courts for the cases of missing persons and not to internationalise the issue otherwise he will suffer severe punishment.

Before the incident in Islamabad, on 27 October, 2013 when the VBMP started the long march from Quetta to Karachi, a distance of 730 kilometers, while Nasrullah was leading the march, his younger brother, Mohammad Sami Ullah, was picked up in a vehicle by plain clothed persons. He was tortured and released after they threatened him to convey a message to his brother to stop the long march, “Otherwise”, they said, “They know how to stop such things”.

In the month of November, When Nasrullah Baloch went to hospital for the treatment of his son, his other brother, also younger, Niaz Ahmed Baloch, was sitting outside the hospital in a car. Armed personnel came to him and threatened him that if his brother does not stop activities on the issue of disappearances he will be, “dealt with in a wrong way”. Nasrullah informed the Supreme Court about the threats he was receiving from the intelligence agencies during the proceedings on 5 and 6 November, 2013. The Chief Justice ordered and directed the government to provide him security, but this official order of the court was ignored by the government and the police.

In the month of September, 2012, when the UN Working Group on Enforced and Involuntary Disappearances came to Balochistan, a delegation of VBMP met with them regarding the missing persons’ cases. After a few days the chairman and vice chairman of the VBMP received threats. Nasrullah and other people submitted an application in the Supreme Court of Pakistan about the threats they were receiving and the chief justice directed the police to file a First Information Report (FIR) regarding the threats. This Supreme Court order was personally handed over to the Capital City Police Officer (CCPO) Quetta by Nasrullah. The CCPO told the Station House Officer (SHO) in front of Nasrullah to register the FIR. However, as some officers told Nasrullah, the police completely ignored the orders of the court because of the pressure exerted by the military.

Enforced disappearances in the country are wide spread and the law enforcement agencies including the military and paramilitary forces are involved. The absence of a proper criminal justice system and the failure of the rule of law are the basic causes of the disappearances. It has become an easy method for the state agents to keep persons in their custody for indefinite periods of time, torture and kill them without any evidence. The weakness of the justice system is evident as since 2001 the higher courts have failed to recover the missing persons. The military and other institutions, which are accused of responsibility for the disappearances, have shown their arrogance and distain by refusing to obey the courts orders.

The nationalists and the suspected terrorists from fundamentalist organisations are kept incommunicado, tortured and killed. The Pakistan Desk of the AHRC has extensively documented cases of disappearances and mobilized public and international opinion against the practice of disappearances by the military and other agencies. To eliminate the evidence of disappearances, the agencies kill the victims extrajudicially and dump their bullet riddled bodies on the road sides. Since July 2010 more than 500 dead bodies of missing persons were found in Balochistan province along; all bore signs of torture. The rights groups in Balochistan claim that more than 18,000 persons are missing, whereas in Sindh province the number claimed is 1,000, in Khyber Pakhtun Kha 2,000 and 100 from Punjab province.

During the end of last year, three mass graves were found in the Khuzdar district, Balochistan, and 169 bodies were found. The people and the media have been prevented from visiting the place. It is generally believed in Balochistan that the bodies must be those of missing persons.

Please write the letters to the authorities calling them to provide the protection to Nasrullah Baloch, Chairperson of Voice of Baloch Missing Persons and the other office bearers of VBMP. The government must respect the right to life of every citizen of Pakistan and must change its policy of disappearances and dumping the bodies of extrajudicially killed persons. If any harm comes to Nasrullah or his colleagues then the government and military establishment will be held responsible.

The AHRC writes a separate letters to the UN Working Group on Enforced and involuntary Disappearances (WGEID), and the Special Rapporteur on the Situation of Human Rights Defenders calling for his intervention into this matter.