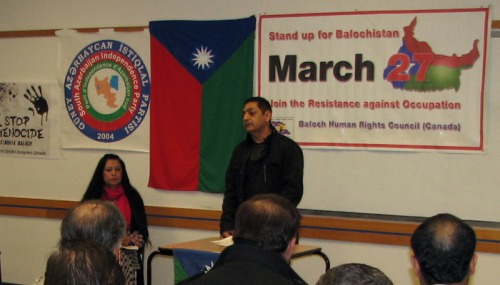 Toronto, March 29, 2014 – BHRC (Canada) held a meeting in Toronto to mark the Pakistani military invasion of Balochistan on March 27, 1948. The gathering of Baloch, Sindhis, Kashmiris, Ahwazi Arabs and Azeri Turks was addressed by speakers from various organizations. The event in Toronto was part of the Black Day observed throughout Balochistan to voice their dissent against the forced annexation of Baloch lands into Pakistan by an illegal military invasion.

Ms. Mumtaz Baloch, opening the evening event, provided the audience with an introduction to the history of Balochistan and the events of 1948 that led to the illegal military occupation by Pakistan. She explained how the sovereign parliament of Kalat had decided in favour of independence rather than joining Pakistan. 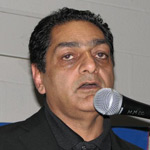 Those who do not move; do not notice their chains.

I would like to begin with quoting not only a revolutionary individual but an extra ordinary woman who had a deep sense of what freedom means to a people or a social class in terms of awareness and clarity of their goal. Rosa Luxemburg said, “Those who do not move; do not notice their chains.” This truly depicts the inner dimensions of Baloch national liberation struggles in the last hundred years – after every battle, we as a people became increasingly aware of the chains and its various forms of illusions. Today we have reached a point in our collective history where freedom is the only true voice that echoes from the mountains of Balochistan.

On March 27, 1948, Pakistan Army attacked Kalat, the centre of Balochistan’s sovereign legitimate parliament without provocation and violated the international law by forced annexation of an independent country into Pakistan. The loss of motherland has since become the basis for all the human rights abuses; loss of Baloch national identity and culture, atrocities, plundering of resources in the name of development, and of course the ongoing fifth military operation in Balochistan with genocidal intent.

Today, Balochistan is at the crossroads of history – fighting a war of independence in a region plagued with religious extremism, terrorism and proxy jihadist outfits that actually are the extended forms and outgrowths of the Islamic ideology of the state of Pakistan and its military institution. The expansionist designs of Pakistan’s colonial army became evident within the first year of its creation when armed tribal militia and military regiments were sent to capture Kashmir and Balochistan in 1948 leading to developing zones of conflict destabilizing the region. It is no coincidence that Pakistan Army’s first and second Commanders in Chief were British military officers, General Sir Walter Frank Messervy who served the state forces from August 15, 1947 to February 10, 1948 and General Sir Douglas David Gracey – February 11, 1948 to January 16, 1951. Similarly, the Pakistani spy agency ISI was founded in 1948 by a British army officer, Major General R. Cawthome, who at the time was the Deputy Chief of Staff in Pakistan Army. He served as the Director General of Pakistan’s ISI until December 1952.

So much for the so-called ‘Two Nation Theory’ and the Islamic ideology that founded the basis for the creation of Pakistan in 1947 designed and served by the British colonial masters as head of the Islamist army that invaded Balochistan on March 27, 1948. The state of Pakistan, since its creation in the name Islam has become a death trap, killing millions of Muslims including Bengalis, Baloch, Sindhis and Pakhtuns.

Talibanization of Pakistan society in general and Balochistan in particular is part of the security policy manufactured by the state and its agencies to counter indigenous nationalist and secular movements. Jihadi outfits such as Lashkar-e-Jhangvi and Taliban-linked proxy death squads along with the state security forces are involved in the targeted killings, enforced disappearances, brutal torture, and in custody executions of Baloch political activists. The recent discovery of mass graves in Tutak, Khuzdar, massacre of Hazara Shias, slaughtering of civilians after burning their homes in Kech, Makran, the targeted killing of Sindhi nationalist leader, Maqsood Qureshi and attack on Hindu religious centre in Sindh shows the extensiveness of such policies aimed at destroying the social and political basis for secular nationalist movements for rights and freedoms.

The role of China in Pakistan’s aggressive military growth and buildup in the region is a threat not only to the West but also for the future peaceful development of nations striving for independence. The handing over of the deep sea port of Gwadar to China is a strategic move by Islamabad to allow Beijing’s military expansion in the Indian Ocean for ultimate control over energy resources and their international routes. China-Pakistan military alliance will spark further conflict in the already crisis-ridden region inviting proxy wars and terrorism, destabilizing territories and economies.

Balochistan’s independence is crucial for the future of peace and development in the region – the sooner the world realizes the fact, the better it will be for a sustainable peace and demilitarization of solutions for economic progress. On the other hand, for Balochistan to become a viable voice in the international community, it will have to play a larger political role by uniting as a national alternative force acceptable to the democratic norms of the western powers in order to get recognized.

In the end, I would like to take this opportunity to thank our Sindhi friends for their warm welcome and support to the Voice for Baloch Missing Persons long march in Sindh. People of Balochistan stand in solidarity with Sindh in their struggle for rights and freedom and the great loss of their leader, Maqsood Qureshi, Bashir Khan Qureshi and the disappeared activists of the Jeye Sindh Qaumi Mahaz and Jeye Sindh Mutaheda Mahaz by the Pakistani state agencies.

Tarek Fatah, author, columnist and Baloch rights activists spoke on the subject of the jihadi nature of the Pakistan state and its army’s role in developing global terror network promoting terrorism. “Pakistan, Iran and Saudi Arabia are spending billions of dollars to lobby and buy off senators, congressman, representatives in the UN, media persons and think tanks in the West and the U.S.,” he said. He emphasized that unless the voices against religious extremism and the opposition to Pakistan, Iran and Saudi designs to promote terrorism is not exposed and effectively presented in the international forums, our case for Balochistan, Sindh, Kashmir or Ahwaz will not be materialized. “Balochistan and oppressed nation’s freedom struggles are genuine peoples’ movements and have the potential to challenge terrorist states such as Pakistan and Iran,” he said.

Hajan Kalhoro, representative of World Sindhi Congress, informed the audience about the Sindh nationalist struggle for freedom and rights and growing human rights abuses including the recent targeted killing of Jeye Sindh Qaumi Mahaaz leader, Maqsood Qureshi. He spoke on the issue of growing threat to Sindh’s Hindu community targeted by religious extremists as a state policy to marginalize the original inhabitants of Sindh and promote a culture of intolerance. He expressed his solidarity with the Baloch struggle for independence and mentioned that Sindh’s political climate is rapidly changing because of the feudal rulers’ incapacity to resolve even the basic needs of Sindhi peasantry or provide a sense of security to the vibrant middle class of Sindh. He emphasized that Sindhi and Baloch struggles for rights and freedom are on one page about their future as free nations.

Abusufyan Al-Ahwazi, representative of Ahwazi Democratic Popular Front spoke on the similarity of Al-Ahwaz and Balochistan’s illegal military occupation by Iran and Pakistan. He stated that the Persian dominance over Al-Ahwaz has robbed our people of our language, culture and natural resources and though ninety per cent of oil is produced on our land, the local populace lives in poverty. He explained that the Iranian theocratic state and the ruling clerics will never surrender or share power with anyone and the rights movement of Al-Ahwaz believe that independence is the only guarantee for our future and sovereignty over our land and resources. He supported the struggle for Balochistan’s independence from Pakistan and Iran.

Mumtaz Khan, representative of United Kashmir People’s National Party voiced his solidarity with the freedom struggle of Balochistan against the illegal military occupation by Pakistan in 1948. Furthermore, he informed the gathering about Pakistan’s first military adventure into Kashmir prior to the attack on Kalat by sending in 5000 Taliban-style Pakhtun tribal Lashkar that plundered and massacred innocent civilians. He said these early Taliban were then organized and armed by Pakistan Army and led by Major General Akbar Khan into the Kashmir valley that initiated the first conflict leading to three India-Pakistan wars and several border skirmishes including the Kargil incident. He emphasized that Balochistan’s struggle for independence is important to all the freedom and peace loving people in the region. He said, “Balochistan is spear heading the secular nationalist struggle that has the potential to change the political dynamics of South Asia and help liberate nations under occupation.”

Oguz Turk, representative of South Azerbaijan Independence Party stated in speech that without independence, nations under occupation cannot enjoy the fruits of democracy – because democratic values in a society can flourish only with freedom. He explained that cultural freedom, right to mother tongue, freedom of expression, human rights, control over natural resources and economic progress require peaceful development – and nations under occupation can never live in peace. He further said that occupation of an oppressed nation is in actuality a declaration of war against the occupied. There cannot be peace without freedom.

Mohammad Ali Baloch, representative of Balochistan People’s Party (Iran) and Secretary General of BHRC (Canada) delivered his speech in Balochi and Persian. He spoke on the history of Balochistan at a critical juncture when the nation was illegally occupied through a military invasion by Pakistan in 1948 following the Persian occupation of Baloch lands in 1928. He said that the division of Balochistan, however, did not stop the struggles in either part though with different level of organization. He stated that today the Baloch awareness has reached its highest peak and its coordinated efforts are crystalizing in the process of movements. He mentioned that Kalat had a sovereign parliament that democratically decided to choose independence over annexation with Pakistan. He spoke of gross human rights violations against the people of Balochistan by Iran and Pakistan.