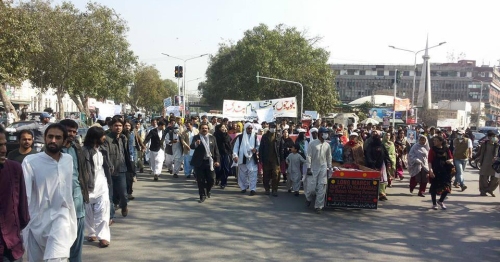 LAHORE: “As many as 18,000 people from Balochistan are unaccounted for. More than 2,000 mutilated bodies have been found. I will provide the list of names to the United Nations officials when the caravan reaches Islamabad. We will also organise a protest and sit-in,” said Mama Qadeer on Thursday at the Punjab Union of Journalists’ office at Diyal Singh Mansion on The Mall.

Qadeer has been leading the protest and the march of the Voice of Baloch Missing Persons.

“I have received my son’s body. He had been tortured. My seven-year-old grandson, present here, has been orphaned. What was his crime?” Qadeer asked. He also mentioned Qasim, a 14 year old boy from Turbat, who had disappeared a few days ago.

END_OF_DOCUMENT_TOKEN_TO_BE_REPLACED

BALOCHISTAN: Pakistan Army has started a grand scale operations in the areas of Dera Bugti and Kech.

According to Baloch Republican Party Media Cell sources, Pakistan Army has launched a fresh military offensive in Wagoo, Lop, Larpati, Chabdar, Doi wadh and nearby areas of Dera Bugti on thursday (13 Feb 2014) and heavily bombarded civilian populated areas. At least 22 people, majority women and children, were killed while 12 civilians were abducted by forces during this ruthless military operation of Pakistan Army. A few deceased are named as Salamhan s/o Sahazo Marri, Gulo Bugti, Hazaro Bugti along with his wife and two children.