Voice for the missing Baloch being heard in Multan 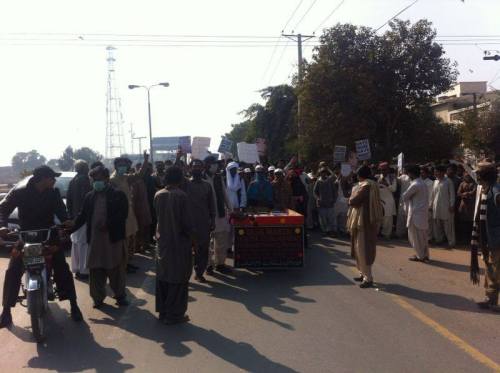 MULTAN: The Baloch activists, led by Voice for Baloch Missing Persons Chairperson Mama Qadeer Baloch, arrived in Multan on Wednesday on the 76th day of their long march to Islamabad highlighting the issue of Baloch missing people.

Mama told reporters that the movement for the recovery of missing Baloch people had started in 2005 without much success.

He said the march would conclude outside the United Nations’ Secretariat in Islamabad where they would present the list of Baloch missing people with the secretariat and the embassies of different countries, including the US, the UK and China. He said they were in touch with embassies.

He said that they were receiving threats and incentives to end the march. He did not elaborate who were hurling threats or offering incentives.

“How can we sell our motherland and the blood of martyrs?” he asked.

He said they had not pinned their hopes on the Supreme Court as former chief justice Iftikhar Chaudhry spoke loud but remained fail to recover the missing people.

He said 18,400 Baloch were missing while 2,000 mutilated bodies were found in recent years.

“We have the detail of every missing person and update record regularly,” he said.

He said that like Balochistan and Sindh, the people of Punjab also welcomed them.

“We’re here to tell the people of Punjab that what is going on in Balochistan and that we are not against Punjabis but only against the oppressors,” he said. He said the Baloch nationalists were not involved in the killing of Punjabis in Balochistan. Secret agencies were killing the Punjabis to defame the Baloch people.