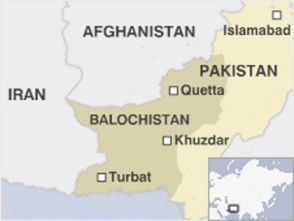 It would have been inconceivable that any U.S. official, let alone a Secretary of State, would host a delegation from Serbia the day after mass graves were discovered in Srebrenica in 1995.

Yet on Sunday, a day after bullet-ridden bodies were discovered in suspected mass graves in Pakistan’s military-controlled province of Balochistan, Secretary of State John Kerry was toasting a delegation of Pakistan security officials at the State Department.

Balochistan and human rights officials say 169 bodies have been uncovered so far. (Pakistani officials put the number at 15.) Victims and families of Baloch youth who have disappeared and who are feared to be among the decomposed bodies being unearthed from the mass graves, had hoped Kerry would raise the issue with his Pakistani counterpart.

Instead they heard Kerry say to the Pakistanis, “We’re really delighted to have you back, and I look forward to our continued conversation.” America looked the other way in 1971 when the Pakistan Army slaughtered a million of its own citizens in what is now Bangladesh.

What emerged was a country that hosted the mastermind of the 9/11 attacks, allowed Osama bin Laden to operate on its soil for more than a decade and whose terrorists have been involved in numerous jihadi attacks around the world, ever since the bombings of U.S. embassies in East Africa and the attack on USS Cole off Yemeni waters.

Yet America continues to give to Pakistan billions of dollars in aid, which is then turned around to generate more hatred towards the West and produce more jihadi terrorists.

Now the U.S. is giving the same Pakistan army another pass as it carries out the ethnic cleansing of the indigenous Baloch people from their homeland.

In response, the Baloch have taken up arms and are fighting their fifth war of independence since 1948, when the Pakistan Army invaded and captured the independent and sovereign state of Kalat.

While past rebellions against Pakistan’s occupation were led by Balochistan’s ruling elites, this time it is a middle class physician who has given up his medical practice to head the “Balochistan Liberation Front”.

In an interview on NewsTalk1010, I asked Dr. Allah Nazar Baloch why he should not be considered a “terrorist”.

He argued it was Pakistan that should be considered a terrorist state.

“(The) Pakistani state … is breeding terrorists, religious extremists and it spreads terrorism throughout the world, even (in) America, Britain and other countries of Europe,” he said.

The Balochistan representative to the United Nations Commission on Human Rights in Geneva, Mehran Marri, has accused the Pakistan state apparatus of committing “crimes against humanity” and called on the UN to intervene and send a team of independent forensic experts and human rights leaders into the area to take over the mass graves and identify the bodies found there.

Pakistani officials claim the mass graves were the work of India’s intelligence agency, RAW, and Baloch separatist groups, and Kerry has apparently chosen to swallow this explanation.

He may be under the delusion the U.S. can use Pakistan as its puppet in the region, as a counterweight to a rising India.

Bin Laden must be laughing in his watery grave.