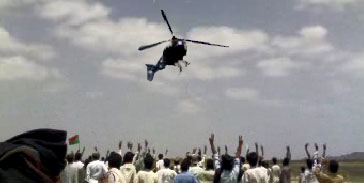 Panjgur: Pakistan Army is using Poison Gas in an attack on Baloch population in Panjgur district on Friday. There are several fatalities, dead bodies of innocent women, children, young and old, all lay scattered in the front compound of the houses. No medical team, no press, hydro is cut off, telephone lines are cut off and the mobile phones are jammed by using jammers by the Army.

According to the local sources, all major road to the other cities are blocked, no one is allowed to leave and enter into Panjgur. Panjgur is under sieged and surgically cut off from the rest of the world. The ongoing operation which has started on Friday and continued till now. Families with injured are being harassed by the Pakistani Army. Panjgur is completely manifesting a scene of an occupying military garrison. So far six innocent villagers including women and children have been killed.

Sources, who closed to Baloch Human Rights Council, from the nearest areas have confirmed that people are having trouble breathing. They are developing rashes on thier skin. Everyone is coughing for unknown reasons.

So far five villages including Washbood, Pasth, Pooram and two other small ones are the target of the current operation.

Colonel Muhammad Azam of Frontier Corps (FC) briefed the reporters saying a massive search operation is being carried out against the Baloch Militants with the direction of Balochistan provincial government. It is confirmed that Premier Of Balochisan Dr. Malik has extended his support to this opration after a visit from the Federal Interior Minister Choudary Nissar in Quetta at high level meeting. It has also been learned that more troops are being sent to join the operation, the operation is extending to the other parts of Makuran.

Baloch Human Rights Council-Canada believes that the Pakistan Army is giving the Sectarian Jihadi Fundamentalist Jesha-e- Muhammad, time to flee the Mastung area, who are responsible of killing hundreds of Shia in Mastug. BHRC has also said that Federal government is keeping a blind eye and supporing its extension the Islamic Fundamentalist who have sanctuaries that exist in the Punjab heartland and in Karachi. Instead, Pakistan Army started its operation against the secular Baloch, who has nothing to do with this sectarian fights inside Pakistan.

Baloch Human Rights Council appeals to the UN Secretary General Ban Ki-moon that United Nations must immediately constitute a fact finding investigation team and that team should be dispatched immediately to Panjgur Balochistan and find circumstantial evidence of poison gas and make the state of Pakistan responsible of this heinous crime against humanity.

Balochistan was occupied in the year 1948. This is the fifth insurgency by the Baloch against the occupation of Pakistan.