Partial strike in parts of Sindh on JSMM’s call 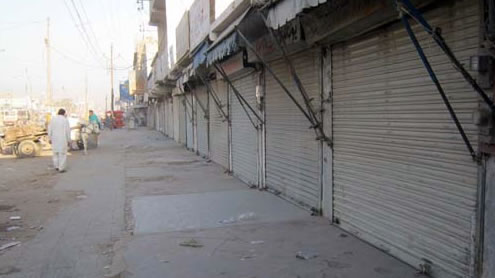 KARACHI: A partial strike was being observed in parts of on Saturday on a call by Jeay Sindh Muttahida Mahaz (JSMM), hours after seven people, including a policeman, were injured in a series of small improvised bombs and cracker blasts across the province, DawnNews reported.

The JSMM had given a strike call for Jan 25 (Saturday) in Sindh against what it called the British government’s silence over Muttahida Qaumi Movement (MQM) chief Altaf Hussain’s statement about division of the province.

JSMM chairman Shafi Burfat said in a statement on Friday that if the British government remained silent while its soil was used against Sindh then its interests in the province would be at stake.

Whereas, DawnNews reported that at least 40 cracker attacks had occurred until Saturday morning in Sindh, including in major cities of the province such as Karachi and Hyderabad.

On Karachi’s Nagan Chowrangi, a cracker had been hurled from a flyover which injured a child. Meanwhile, in Qayyumabad and Gulshan-i-Hadid areas two cracker blasts occurred. Whereas, on University Road, in the areas of Landhi, North Nazimabad and Korangi, cracker and hand grenade attacks were carried out by unknown attackers. A policeman and seven children were injured in these attacks.

In Hyderabad, unknown people lobbed crackers at seven places. The improvised bombs were thrown outside a police helpline (15) office in Qasimabad, on Qazi Abdul Qayyum Road near Kaimkhani hostel, at Hyder Chowk, in Latifabad Unit-7 near a taxi stop, on Hali Road and at Liberty Chowk.

Hyderabad SSP Irfan Bahadur suspended four SHOs in whose areas the blasts had taken place. The SHOs of Bhit Shah and Dadu were also suspended.