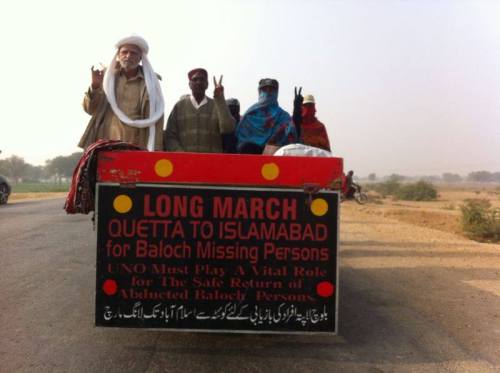 Pubjab, Pakistan: The Voice for Baloch Missing Persons Long March ended their 39th day of walked on Monday 15 Kilometer away from Rajanpur.

Despite many obstacles the marchers were determined to continue their journey to reached Islamabad.

Four members of ISI stopped the march near Rajanpur and tried to pressurise them to abandon their walk but the leaders of march insisted that they will continue the march to reach Islamabad.

The VBMP long march leaders said they their protest is peaceful and democratic but the intelligence agencies were threatening them to end the walk for justice.

Qadeer Baloch in a video message said: “I am chairman of Voice for Baloch Missing Persons. I would like to [inform] and request all Human Rights Organisations including United Nations, Amnesty International, Asian Human Rights and Human Rights Watch that today four person of [Pakistan] intelligence agencies stopped our march 15 kilometers away from Rajanpur. They were four personnel of ISI, they armed in plainclothes and they were armed.”

He added: “They stopped us and asked us to suspend the march otherwise we (ISI) can do anything with you. They spoke with me for half hours and constantly threatened me. At present my life is in extreme danger because the government of Punjab is not providing security to me.”

He said he was “very distressed but I will continue the long march to Punjab at all cost. I will not suspend the march. They asked me to go back but I will not go back.”

He urged the Baloch nation and Baloch parties to strongly protest against the Punjab government for not providing security to Baloch marchers most of whom are women and children.

The VBMP started their march from Quetta on 27 October 2013 and reached to Karachi after 27 days. One 13 December 2013 they started the second phase of march from Karachi to Islamabad and have walked for 39 days so far.

The VBMP is marching against military operation, enforced-disappearances and murder of Baloch activists by Pakistani forces in Balochistan.