“Why do they fear books?” – Mir Mohammad Ali Talpur 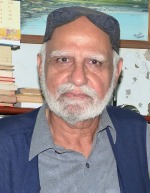 On January 13, the Frontier Corps (FC) of Balochistan raided a book fair being held at Atta Shad Degree College Turbat dispersing students anxious to get books for reading and confiscating books which they termed as provocative and seditious.

After this unjust and illegal raid on the College book fair, Lieutenant Colonel Muhammad Azam  of FC while talking to the media said that the FC had seized anti-Pakistan literature, books, maps, posters, banners and other subversive material.

He claimed that certain elements in the “banned BSA (Azad) wanted to use students for their designs on the dictates of the foreign agenda”. He said that these elements were brainwashing the college students to provoke them against the state through anti-Pakistan poetry, anti-Pakistan literature and stories based on the lives of the miscreants. He said that these brainwashed students were then used in subversive incidents across Pakistan. He said that miscreants had also established a media cell and anti-state slogans were written on the walls of college. He warned that action would be taken against the printing press where these books were being printed. He disclosed that following secret information recently, the FC had sealed a private language centre where anti-Pakistan literature was being taught to students. The FC IG, Ejaz Shahid, praised the FC personnel for their successful raid which, he said, saved the youngsters from being led astray through brainwashing.

These children have been illegally disappeared by the FC during the raid on an english teaching institution in Turbat pic.twitter.com/GNSAZKPw6s

Bravo! They move not a finger against the Jihadi and hate-mongering sectarian literature but when Baloch want to learn about the world it is termed as subversive.

The Pakistani establishment’s problem is its arrogance and resulting ignorance which doesn’t allow them to see anything beyond their belief. They believe that the world was created on 14th August 1947 and anything worth writing or reading about is what they spuriously manufacture and impose while all the narratives preceding it and nullifying the official narrative are considered dangerous and subversive.  The Lieutenant Colonel is perturbed that there were books on lives of Baloch Heroes (he calls them miscreants) who have resisted Pakistan’s oppression and exploitation; he thinks this would subvert the minds of those who read these. They want the Baloch youth to read only about the spurious heroes of their making who have no importance or meaning for Baloch youth and people. They want the Baloch youth to read about the marauders and tyrants like Mehmood Ghazi, Ghauri, Bin Qasim, Hajjaj Bin Yusuf and others of their ilk but not about Nawab Nauroz Khan, Naseer Khan Noori, Shaheed Mir Mehrab Khan or the martyrs who died resisting Pakistan since 1948. They do not want Baloch students to read the poetry of Atta Shad, Mir Gul Khan Naseer, Jawansaal Bugti and others because they wrote about Baloch resistance and Baloch heroes. Through their imposed curriculum they want to nullify the Baloch history and, therefore, the Baloch social and political ethos.

This raid on free thought isn’t one bit surprising because the spurious heroes and fabricated myths form the basis of Pakistani ideology. Irfan Husain, in his piece titled “Pakistan as a security state” (Dawn, December 12, 2009), writes, “Generations of young officers at the military academy at Kakul have been taught that India is the eternal enemy; and that civilians are a necessary evil who have to be endured, but never trusted. A part of this indoctrination is the notion that one Muslim soldier is equal to 10 Hindus.”

Naturally they will term the biographies of Che Guevara, Gandhi, Nehru and books by Bertrand Russell, Frantz Fanon, Marx and others as subversive because it is in keeping with their beliefs. But history proves that this banning and burning of books has never helped those who aim to stop the spread of knowledge. Those who burned books in Germany, Baghdad and Alexandria couldn’t stop people from acquiring knowledge and fighting for rights; the people of Balochistan too will get what they want; this repression will make it a little difficult but will make it more meaningful. The Baloch resolve is indisputably unyielding as the Long March by the Voice of Baloch Missing Persons (VBMP) team, in its 63rd day at the time of writing, has proved and is proving.

On the one hand they keep harping on their love for education for Baloch and on the other they seal teaching centres because they think it was subversive. Gen. Kayani in his speech at the Military College Sui (MCS) last August said over 20‚000 Baloch students had been enrolled in the Pakistan Army and the FC-run educational institutions, including cadet schools‚ medical colleges‚ mining institutes and so on. The fact is that the army has assumed the primary role in transforming the Baloch socio-cultural ethos, an ethos which considers poverty in freedom as better than well fed slavery. This attempt to regulate Baloch education is more like the Australian whites trying to civilize the Aborigines. The Pakistani state is busy killing the educated youth. In fact, it doesn’t want education for Baloch youth, it wants indoctrination.

The FC doesn’t care two hoots for anyone and in past Aslam Raisani, Nadir Magsi and a clutch of ministers publicly accused it of running a parallel government but attitudes remained the same. On 13th January, an adjournment motion was admitted in the Balochistan Assembly for a general debate on what it called insulting attitude of the Frontier Corps personnel towards people during search of vehicles at various checkpoints. The Leader of the Opposition, Maulana Wasay, while criticizing the FC personnel said that their way of searching vehicles was creating problems for people, especially those who visit Quetta from other parts of the province. The Minister for Law, Abdur Rahim Ziaratwal, said the attitude of FC personnel had become intolerable and people sometimes had to wait for hours to cross an FC checkpoint. People from other parts of the province who visit Quetta for purchasing things become victim of FC personnel’s high-handedness. The pathetic and powerless Law Minister can only lament the high-handedness but has no authority even to reprimand the FC. This is quite in keeping with the ground reality of Baluchistan: Dr. Malik is a puppet as are his ministers; all installed to give a veneer of respectability to army rule there. In meeting, the important ones, Dr. Malik is chaperoned by Commander Southern Command Nasir Janjua and FC IG Major General Ejaz Shahid so that he makes the right noises.

If there were enough educated Baloch and if enough of them were ready to accept jobs those enjoying benefits on Balochistan’s quotas would suffer so they keep education to Baloch limited. The government has fixed Balochistan’s quota at 6% for making appointments in the Ministry of Foreign Affairs.  If this quota was strictly observed then there would be a minimum of 130 employees from Balochistan serving overseas but there are only 24 serving which is a mere 18% of allotted quota. The rest of quota are thus Punjab 53%, Sindh 20%, Khyber-Pakhtunkhwa, Fata, Gilgit-Baltistan 18% and AJK 3%. Balochistan as mentioned above gets only 18% and no prizes for guessing who these jobs go to. Had not the Baloch persisted with armed resistance from day one they would have had been by now demographically made only 1% of the population there.

All educated Baloch are considered potentially dangerous unless they have been bought over through incentives and enticement. An educated Baloch has the potential of understanding the world and subtlety of exploitation by neo-colonists; so blaming Sardars for their own systematic policy of keeping Baloch illiterate they have kept Baloch in backwaters of literacy. The establishments know that the best way to keep people enslaved is by keeping them illiterate, the enslaved people should understand that education will speed up their achievement of liberty; the Baloch should acquire what colonizers call subversive education because the education that colonizers provide can only pollute minds and blunt the will for liberty. This raid marks the beginning of renewed organized attempt to stop Baloch youth from reading any literature which will widen their vision. Henceforth printing presses, coaching centres, book fairs, libraries, book stalls newspapers and columnists will be fair targets on excuse of subversive material. Establishments forget that it isn’t the enlightening literature that is subversive but it is the falsified and spurious history and literature which is truly subversive.

Mir Muhammad Ali Talpur has an association with the Baloch rights movement going back to the early 1970s. He tweets at mmatalpur and can be contacted at mmatalpur@gmail.com