Parliamentarians gather to express solidarity with oppressed citizens of Baluchistan 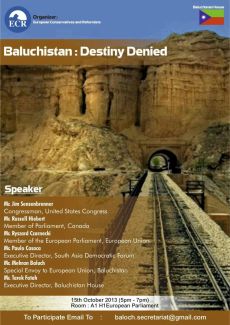 Brussels: Legislators from around the globe gathered at the European Parliament at Brussels, Belgium this week to denounce the Pakistani government’s kill-and-dump policy in Baluchistan and to express their support for democracy, human rights and the rule of law in the beleaguered province.

The event ‘Baluchistan: Destiny Denied’ was hosted by the European Conservatives and Reformists Group in the European Parliament and Baluchistan House.

Introducing the event, Paulo Casaca, executive director of South Asia Democratic Forum, highlighted the continuing oppression of the Baluch people and the systematic denial of their rights by the Pakistani government.

Ryzsard Czarnecki, an MEP from Poland, spoke about Baluchistan’s potential riches from its natural resources and lamented the fact that Pakistani government policy effectively makes Baluchistan one of the poorest and least developed regions on the planet, with alarmingly high rates of infant mortality and illiteracy.

The event, attended by MEPs, activists, officials and diplomats, comes just days after the European Parliament delivered a stinging rebuke to Pakistan in a resolution denouncing the recent murder of Christians by jihadis in Peshawar.

Opening the session, Paulo Casaca said: “The most important issue is probably the one of the absence of a state of law. It is vital to defend minorities and stop the kill and dump policy. There is a genocide of the people of Baluchistan.”

Ryszard Czarnecki, speaking about the recent earthquake and the Pakistani government’s decision to prevent access to international NGOs, said: “The Pakistani position regarding the NGOs not being allowed to go to Baluchistan to provide assistance is definitely a problem motivated by the broader situation in Baluchistan that the Pakistan government wishes to hide. Pakistan has also failed when it comes to following on missing people and, most importantly, there has been a kill-and-dump policy from Pakistani officials that is unacceptable.”

Mehran Baluch, special representative of Baluchistan to the EU, denounced Pakistan as guilty of brutal colonialism, saying: “The situation in Baluchistan can only be defined as genocide and the silence regarding this issue is deafening. Pakistan’s creation was an unusual historical incident and the best option for regional peace is to support Baluchistan’s nationalist movement.”

Russ Hiebert, a Canadian parliamentarian, focused on the role that the international community could play to bring about positive change in Baluchistan. He said: “The solution lies in justice for the people, and the international community must play a role in this. Justice must be restored otherwise there will be no end in sight to the violence. Fear is a reality on the ground, even among judges which makes the judicial system unreliable.”

Andrew Percy, a British MP, drew attention to schooling, saying: “The issue of education is very important to the United Kingdom as one of the biggest providers of foreign aid to Pakistan, especially regarding education. There have been discussions in the United Kingdom about how much has been spent but not how that amount has been spent, which is the most important issue. Education is an important tool to fight extremism, sectarianism and any sort of promotion of hate.”

Tarek Fatah, executive director of Baluchistan House, drew attention to the Pakistan-China relationship and in particular the Chinese military’s takeover of Gawdar port near the opening to the Persian Gulf. He said: “Today, Baluchistan’s position at the Strait of Hormuz is crucial, a fact which is reflected by agreements between China and Pakistan to allow China to take over the port of Gawdar. The military of Pakistan are a terrorist organisation occupying Baluchistan.”

US Congressman Jim Sensenbrenner, who was unable to attend due to the US government shutdown, said in a written statement: “As a student of history, I know much about the tragedies that have occurred in Baluchistan. The Baluch people have pressed for nearly seven decades to throw the yoke of Pakistani rule. Rightfully, the Pakistani regime has lost the confidence of the Baluchs because Baluch activism is met by Pakistani armour, artillery and air strikes. Respected organisations like Amnesty International and Human Rights Watch continually catalogue the human rights abuses and deteriorating situation. But it is my hope that international pressure, including from the United States Congress, will bring about change for the better for Baluchistan.”