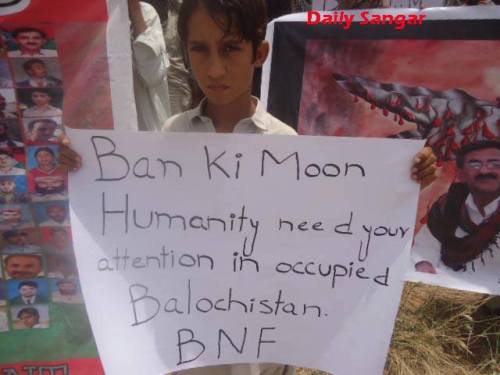 The rally was organized to draw United Nation (UN) Secretary-General Ban Ki-moon’s attention to enforce disappearance, kill and dump of Baloch pro-freedom activists, political and military siege of Baloch nation by Pakistani forces to crash Balochistan freedom movement. To join BNF’s rally in Turbat pro-freedom activists marched towards Turbat from surrounding areas. They had been declined entering in the city by the FC. Women were misbehaved and manhandled by FC as per the culture of dominating nation. Baloch mothers and sisters were disrespected on the soil of Baloch land.

On the other hand Kech Press club was under siege by FC; male staff was brutally beaten up and very abusive languages were used against women and they were manhandled. For many hours journalists were kept hostage not to cover the BNF’s demonstration and threaten them if they did, they would face dire consequences. Demonstrators were worn by Pakistani forces that protest against CM Balochistan Dr. Malik Baloch would not be tolerated as he is the representative of Pakistan and Balochistan.

The Spokesperson said under the leadership of National Party (NP) atrocity and brutality against Baloch national have increased today’s sabotage attempt was the open evidence of Dr. Malik’s party’s policy. Dr. Malik has started to form a special force to counter the Baloch liberation movement and eliminating Baloch political activists in occupied Balochistan, particularly in Makaran. He is recruiting relatives of national traitors who have been targeted by Baloch national army, local thugs, and members of the state death squad and drug barons to crush the Baloch national liberation movement.

To crash BNF rally, Dr. Malik thugs played a important role along with the FC but pro-freedom activists successfully recorded their protest. By sabotaging peaceful rally of BNF Pakistan, an international terrorist state, once again proved that international organization and law have no impact on Pakistan.

A request was sent out to international organizations for peace and human rights to take immediate notice of atrocity committed by Pakistani forces and their representative government against Baloch nation.