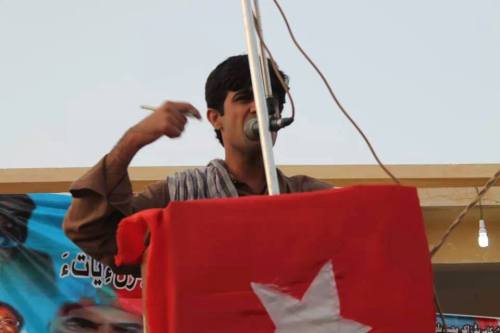 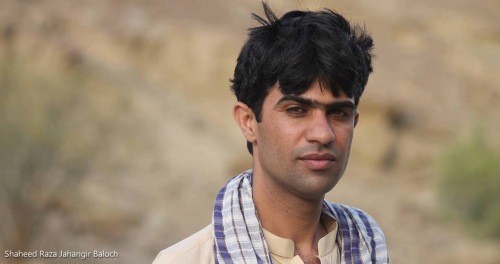 BALOCHISTAN: Pakistan military and intelligence agencies surrounded the house of the Baloch National Movement (BNM) leader Imdad Baloch and attacked it with the heavy weapons killing central General Secretary of Baloch Student’s Organization (Azaad) Raza Jahangir Baloch and Imadad Bojair Baloch a senior leader of the BNM in the early hours of Wednesday (Aug 14, 2013) morning. The firing and bombardment on the house of Baloch leader continued for at least two hours.
END_OF_DOCUMENT_TOKEN_TO_BE_REPLACED 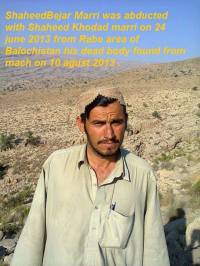 The Pakistan military and its state sponsored media reported on 10 August that the military has killed 6 ‘armed militants’ in an exchange of firing in Machh area of district Bolan in Balochistan. As the saying goes “A Lie has no legs to stand upon”– soon the misleading statements of Pakistan army and media were exposed as the families of previously abducted Baloch identified the bodies of their loved ones.

It became obvious that no arm clash took place in fact the Pakistan military has dumped the bodies of previously abducted Baloch who were in their custody and claimed to have killed them in a fake encounter. Relatives of these men said that they had received phone calls from unknown numbers informing them that their relatives have been killed and dumped. The victims of 10 August have been identified as 28 year old Bijjar Ahmad son of Ali Bux Marri, 35 year old Paliya son of Nodhan Marri, 20 year old Izzat Khan son of Wahsho Marri, 35 year old Dad Ali son of Raheem Khan Marri and Wahid Bux son of Nabi Bux Marri.