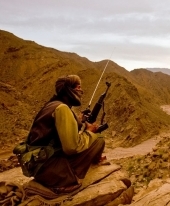 The attack happened in the Mach area of Bolan district, 70 kilometres (44 miles) southeast of the provincial capital Quetta.

According British newspaper daily telegraph, “The buses were headed to central Punjab province, and the separatists have a history of attacking Punjabis who they view as outsiders encroaching on their independence.”

The BLA accepted the reasonability for the attack and killing 13 people According to BBC News. “These 13 people were either employee of the army or of other security institutions,” BLA spokesman Meerak Baloch told the AFP news agency.

Meanwhile the Baloch Liberation Army in an Urdu statement said that on Monday night the fighters of BLA has seized at least 27 people from Punjab bound buses and after checking their identities they discovered that 13 of them were Pakistan military and other security forces personnel, they were going to Punjab, their natives areas, to celebrate Eid. “The BLA has killed 13 them after confirming their identities,” Meerak Baloch said.

News sources reported that another two Pakistani security officials have also been killed and two injured when heavy exchange of firing took place between Baloch fighters and Pakistani forces.

The BLA spokesman further said that the Baloch fighters will not spare the murders of innocent Baloch youth.

The Baloch resistance organisation also urged the international human rights organisations to take notice of occupying state [Pakistan’s] war crimes and paly their role in bringing to justice all those perpetrators who are involved in killing and abduction of innocent Baloch youth, adding that, “The brutal actions of state against Baloch civilians are forcing us to take extreme measures.”

Meerak Baloch said that such attacks will continue till the liberation of Balochistan.

The Baloch pro-freedom parties allege that Pakistan security forces have abducted more than 14,000 innocent Baloch activists and at least 700 among them have been killed under custody of Pakistani security forces.

The Pakistan military, FC and other secret security agencies often abducted Baloch youth from passenger buses, their work places and homes in presence of several eye-witnesses and later kill them in captivity.