COMMENT : An eye for an eye — Mir Mohammad Ali Talpur

The declared eye for an eye response against the Baloch is absolutely misleading because it signifies a justified response, while in fact the repression of the Baloch has always been without excuses

Interior Minister Chaudhry Nisar Ali’s response to the burning of the Ziarat Residency by the Baloch Liberation Army (BLA) in a nutshell was ‘an eye for an eye’, while the Lashkar-e-Jhangavi’s (LeJ) criminal carnage in Quetta at Sardar Bahadur Khan University and Bolan Medical Complex were not considered grave enough to evoke an equally venomous response. I really was not surprised that so much more smoke was emitted by the media and social media than the actual conflagration at Ziarat; it was even termed Pakistan’s 9/11. All this just proved that the plight of the Baloch who have been at the receiving end of state atrocities for decades will never evoke sympathy from people under the spell of the establishment-projected narrative, which squarely blames the Baloch for resisting injustices and consequently getting killed.

END_OF_DOCUMENT_TOKEN_TO_BE_REPLACED

Determination is the driving force to achieve the objectives: Mama Qadeer Baloch 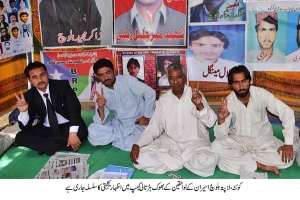