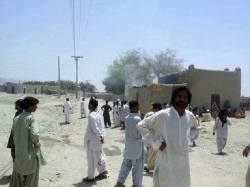 BALOCHISTAN: The pro-independence Baloch political parties in their separate statements have strongly condemned the ongoing military operation in several areas of district Kech in Balochistan from past several days.

Terming the military operation state terrorism the BNV said Pakistani forces have lost the battle on moral grounds and they have failed to defeat the Baloch freedom fighters. Hence, they were conducting operations against innocent Baloch civilians.

The BNV said Baloch national struggle cannot be defeated by such barbaric acts of the state in fact such inhuman acts will further provoke people to stand firmly against the occupying forces and intensify their struggle for freedom.

The Baloch National Movement said that the current Pakistani state atrocities in Balochistan have surpassed the barbarism of Changez Khan and Halaku Khan. Pakistan and its military will be remembered as savages in the history of mankind. The BNM spokesperson said that Pakistani forces killed Jalil son of Fakeer Mohammad and abducted his friend from Turbat on the night of 25th of May. The BNM vowed that Baloch nation will continue the struggle for liberation.

BSO-Azad in its statement said yesterday the Pakistan forces started a military operation in Tump area of Balochistan which is still ongiong. This operation is a continuation of the military offensive started on 24 May in Malant and Gomazi region of Tump, Balochistan.

In Malikabad 70 year old Ghulam Mostafa and Allah Bakhsh Baloch were killed during operation and several houses have been burned down. The house of a famous Baloch musician and singer Menhaj Mukhtar Baloch was also attacked and destroyed. At least three Baloch activists have been abducted during yesterday’s operation.

“Pakistani security forces have looted valuables and tortured women and children during these brutal operations. The Pakistani troops that were sent in Balochistan during the election have now started a full fledge operation in several area of Makuran, Balochistan,” Said BSO-Azad.

The Baloch Liberation Struggle and the Baloch Salvation Front also expressed similar concerns and strongly condemned the military operations in Balochistan. They said that Baloch nation has given enormous sacrifices to defend their land and the occupying states should know that they will never be able to rule Balochistan with sheer use of guns and bombs. The Baloch nation will continue to resist the occupying forces and their suppressive policies against Baloch people.